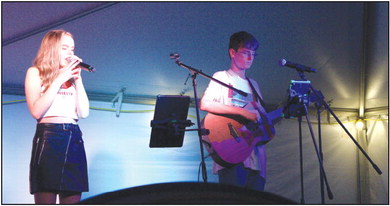 Vivie costarred with long-time friend Graham Brewer in his short film submission “Prom Works Out.” When a film score was needed, Myrick asked bandmate Cameron Hicks if he could score the film.

In short order, Hicks had an arrangement worked out on acoustic guitar that would help provide the tone for the film.

On-screen, Myrick and Brewer portrayed two teens preparing for prom as the film juxtaposed Graham working hard to earn the car keys while Vivie waited at home fixing her hair and making sure she looked just right. Behind it all, the light acoustic strums added a light but building mood as the pair approached the time of their big date.

The film qualified for the Competition Screening, and the three posed together on the red carpet at the Halloran Center in Memphis prior to the viewing Saturday evening.

After walking the red carpet, they rushed to the Delta Fair at the Memphis Agricenter International for a 9:30 p.m. performance on the Delta Stage. With Myrick on vocals, and Hicks on guitar, they en- tertained fair-goers with a wide range of music during their 30-minute set. Their eight-song set included hits like Bruno Mars’ “Count on Me,” the John Lennon classic “Imagine,” and an acoustic rock and roll take on the Billie Eilish gothpop song “Bad Guy.”