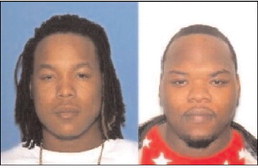 ralphhardin@gmail.com Both shooters in a 2019 incident that left two men dead will spend a long time behind bars. A Crittenden County jury convicted Raheem Stackhouse on Oct. 2, of Murder in the Second Degree, for the shooting death of Nathaniel Henderson, after a weeklong jury trial in Marion.

Judge Dan Ritchey followed the jury's recommendation on sentencing and sentenced Stackhouse to 25 years in the Arkansas Department of Corrections for Murder in the Second Degree and the Criminal Enhancement of Committing a Felony Act with a Firearm.

In August, Reginald Smith was sentenced to 30 years in the Arkansas Department of Corrections after pleading guilty to Murder in the Second Degree and the Criminal Enhancement of Committing a Felony Act with a Firearm for the shooting death of Juwan McClendon. Deputy Prosecuting Attorney Matthew Coe prosecuted the cases for the State of Arkansas.

“I am appreciative of the hard work of the West Memphis Police Department in putting these cases together after an extensive investigation,” said Coe. “These results would also not have been possible without private citizens, including witnesses who came forward to testify, that have had enough of seeing these violent acts in our community and have decided to do something about it. The jury's had an extremely difficult task in this case as well, hearing evidence all week, including multiple late evenings and working late into the night Thursday and Friday nights during the trial. Due to everyone's efforts, these violent criminals have been removed from our community. I have talked with family members from both of the victim's families and I just pray that this gives their families' some closure for the loss of their loved ones” According to the evidence introduced at trial, the shootings occurred in the early morning hours of April 6, 2019, at a concert performed at the 2nd Chance Automotive Repair Shop, which was also utilized as a private club to hold events, located on East Broadway in West Memphis.