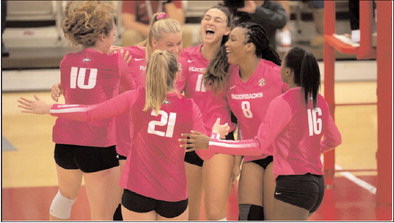 Razorbacks to play conference- only slate in volleyball, soccer in 2020

arkansasrazorbacks.com BIRMINGHAM, Ala. – The Southeastern Conference has announced the fall volleyball schedule for the 2020 season, which includes four weekends of competition and eight total matches against SEC opponents.

The University of Arkansas volleyball team will open the season on Saturday, Oct. 17 as the Razorbacks travel to Starkville, Miss.

to match up against the Bulldogs of Mississippi State. The teams will play once on Saturday and again on Sunday to wrap up the weekend.

Following a bye week, the Hogs will return to Barnhill the weekend of Halloween to host the University of Mississippi. The Rebels travel to Fayetteville for a Saturday-Sunday double header starting on Oct. 31.

Arkansas will be back on the road for a mid-week double-header at Missouri.

The Razorbacks and Tigers will face off on Wednesday and Thursday, Nov. 4-5 at the Hearnes Center in Columbia.

Closing out the fall season, the Hogs will host Texas A& M on Friday and Saturday, Nov. 13 and 14.

The Razorbacks’ full fall schedule with times is available here. Further details regarding match day protocols, fan attendance, ticket prices and operations will be released at a further date.

In August, the SEC announced that the 2020 SEC volleyball season will consist of an eight-match, conference-only schedule over six weeks of competition beginning October 16.

Each school will compete against four opponents, twice in the same weekend on back-to-back days.

Matches may be played Wednesday/Thursday, Thursday/Friday, Friday/Saturday or Saturday/Sunday. The schedule includes a week at the end of the season for any makeups matches for all schools.

SEC volleyball teams will participate in spring competition as well, with details of formats contingent on final decisions by the NCAA to conduct spring championships in those sports.

The Southeastern Conference also released its conference-only schedule which includes an eight-match regular season for the Razorback Soccer program, the league announced on Wednesday afternoon. Arkansas will face all six fellow Western Division members and host four home matches this fall. The season will conclude at the SEC Championship in Orange Beach, Ala. from Nov. 13 – 22. All 14 teams will receive an invite and be guaranteed at least two matches.

The Razorbacks open the season on Saturday, Sept.

19 with a meeting against LSU at Razorback Field.

Arkansas dropped the Tigers 4-0 last year in Baton Rouge, La. for the program’s largest margin of victory over LSU since 1997. The Hogs then go on the road for a matchup at Kentucky on Sunday, Sept.

The Texas A& M Aggies come to town for a week three meeting on Sunday, Oct. 4 at 2 p.m. Arkansas won last year’s meeting, 3-1, giving the No. 18 Aggies their only home defeat of the season. The match also clinched the Razorbacks’ second division title.

After traveling to Alabama for a match against the Crimson Tide, the Hogs will be back in Fayetteville for a home contest against South Carolina on Friday, Oct. 16 at 7 p.m. The Gamecocks gave Arkansas their only conference loss of the season and defeated the Hogs, 1-0, in the SEC Tournament.

“First, we are thankful for the leadership our Athletics Director Hunter Yurachek and SEC Commissioner Sankey have shown, without them we wouldn’t be having a season,” Razorback Head Coach Colby Hale said. “We are grateful for the opportunity to play some meaningful matches and look forward to lacing them up next week in the opener.”

State Senator congratulates Biden, Harris on inauguration ralphhardin@gmail.com It has been...

The WMPD’s Kristen Counce is the new SRO at Faulk Elementary School. Staff and students...

for one is wrong for all. They sure don’t want to swallow their own medicine.

Madonna said she thought an awful lot about blowing up the White House. Kathy Griffin held up a...

The Patriots are red, white and blue, but the students at Marion Junior High are adding a little...

Winter Classes are the Best!

For their science unit on snow, second graders at West Memphis Christian School made snow while...

I don’t typically like to broach the subject of abortion but as I was putting together todays...