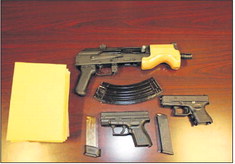 Two men are in jail and there are fewer firearms and illegal drugs in the community thanks to the efforts of the Marion Police Department. Detective Paul Turney offered an account of the arrests.

“During the early morning hours of Monday, June 22, Marion officers responded to a call that was in reference to a suspicious vehicle in the city,” Turney said. “Upon investiga tion, officers made contact with the men inside the vehicle.

During the course of the investigation, officers located a variety of contraband, including:

The Marion Police Department seized three firearms, a cache of drugs and more than $5,000 in cash during a recent arrest.

■ ■ $5,437 in U.S. currency “The firearms, narcotics and cash was seized by the Marion Police Department,” Turney said. “And the two men were taken into custody.”

“At this time, we are following up with further information in regards to this incident,” said Turney.

He said the weapons will tested for ballistic markers to see if any of the firearms might have been used in other crimes.

A $25,000 bond was given to the pair in their initial court appearance.