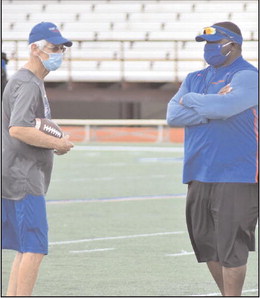 WM School District Upon his introductory speech this morning to his players, new Blue Devil head football coach Robert Hooks instructed them to write down on a sheet of paper a list of things they think it will take to win a state championship.

And with that the Hooks Era began at West Memphis.

Hooks, who met with new players this morning for the first time, was approved on Tuesday night at a special called West Memphis School Board meeting to succeed Billy Elmore as head coach for the Blue Devils. Elmore will move into the position of athletic director, succeeding Larry Bray, who retired just a week ago.

A native of Luxora and a graduate of Rivercrest High School, Hooks also served as former assistant head coach and offensive coordinator at Camden and Bryant respectively, and he is a former offensive line coach at Fort Smith Northside.

They've been knocking at the door yearly.

Like his predecessor, Hooks intends to run the spread offense at West Memphis. But with just over two months before the regular season begins, he may have to make concessions on just how detailed he wants to be within his own system.

'We will run the spread, but I will have to evaluate the talent first to see whether we'll be four wide…it just depends on our personnel,' said Hooks. 'We want to be able to play at a fast tempo, but again we'll adjust to what we've got this year. We want to keep the field 50 yards wide and make defenses honor every part of the football field.'

Defensively, Hooks said 'we'll probably be in a three-front with coverage behind it. I think a base 3-4 defense is what we'll do.'

Coaching is not what Hooks originally set out to do when he graduated Rivercrest High School.

'But somewhere around my junior year of college I pretty much knew that coaching was what I was born to do,' he stated.

'Coach Buck James showed me the ropes on how to discipline kids and how to hold them accountable,' said Hooks. 'I take a little bit from just about every one of those coaches.'

Hooks inherits a Blue Devil program that has gone 28-8 the last three years with three consecutive berths in the Class 6A state semifinals. Included in those seasons were records of 11-1 in 2018 and 10-2 in 2017.

'One thing I see about West Memphis is the number of athletes available,' Hooks commented. 'We have a good junior high feeder system and the kids are high-quality kids with a lot of athletic ability.'

Coaching in the midst of a pandemic will be a challenge, Hooks admitted, but the job will get done.

'The main thing is safety for the kids and taking care of them,' he stated. 'We want to make sure we abide by all the rules and go the extra mile on not taking a chance of spreading or contracting the virus.'

Hooks will also be in hurry-up mode when it comes to establishing his system and philosophy during a summer that will be as busy as possible.

'It's going to take at least to Week 3 of the regular season,' he said. 'I think by Week 4 we'll be gelling.

The biggest thing is not to rush it, but to stick with what you know and really work on fundamentals.'

The rest of the summer workouts will mostly be about evaluation, according to Hooks.

'We want to hit the ground running,' he said. 'We want to find out quickly what's going to work best for this group of kids.'