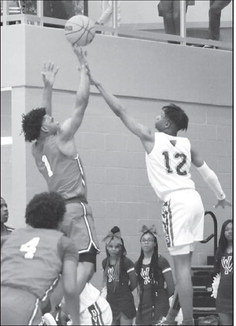 Patriots get revenge with much-needed win

Marion School District The second half of the conference schedule for the Marion Patriots started with the second meeting in the hardwood edition of the Hometown Showdown.

Marion’s boys (9-12, 5-3) were also wanting to bounce back after losing the previous meeting at Patriot Arena to the Blue Devils (17-4, 7-1). Marion coach David Clark said they had been playing well lately, but needed to bounce back to keep the momentum up after the overtime loss to Jonesboro.

Both teams went with a man-to-man defense for the majority of the game, but Marion seemed to have more success with it, despite the size disadvantage.

Marion forced the Devils to shoot difficult shots early and created extra chances for their offense by forcing turnovers.

Marion’s transition offense was lethal early and a big contributor to their 15-10 lead at the end of the first. Tensions began to rise in the second quarter, but technical fouls against both teams early in the quarter seemed to help everyone calm down.

West Memphis had more success inside in the second quarter, but their aggressive defense sent Marion to the free throw line, where they were perfect in the first half. The two teams had an answer either time the other scored.

The Devils made some three-pointers and took advantage of some defensive breakdowns to take their first lead of the night at 44-42 with 58 seconds left in the third quarter. However, Marion would end the quarter with the lead thanks to a corner three-pointer from senior Damien Phillips.

Marion began the fourth with their stall offense, and West Memphis did not have an answer for it. The Pats would drive inside to draw a double team and dish it to whoever the open man was for two unguarded points.

Marion continued to get easy looks until the final buzzer. The 62-55 Marion win was West Memphis’ first conference loss and kept the Pats in fourth place in the standings.

Free throws proved to be huge again in the second half. Marion made 15 of their 18 attempts in the game, compared to a 9 for 21 shooting performance by the Devils. Auburn commit Chris Moore was even uncharacteristically off from the line, missing all three of his fourth quarter free throw attempts.

Marion was led offensively by senior Detrick Reeves with 19 points, his first game against the Devils where he did not score at least twenty points. Senior Makyi Boyce had a solid night offensively as well with 17 points and a threepoint make.

Junior Darrius Waterford also finished with double figures with ten points. Senior BJ Johnson finished with only six points, but his work on the defensive end against players like Moore was crucial.

Up next for the Patriots is a clash with the Lions when Searcy comes to town. Tip off from Patriot Arena is scheduled for 6 p.m.

Friday night for the girls’ game, with the boys’ game following at approximately 7:30 p.m.