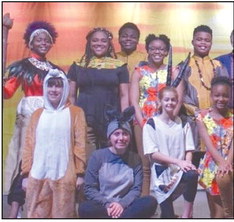 Auditions will be held at the DeltaARTS Glenn P. Schoettle Arts Education at 301 S.

Rhodes, West Memphis, on Saturday, Jan. 11, at 10 a.m., and Tuesday, Jan. 14, at 6 p.m. Auditioners should only come to one of the audition days. At auditions, students will be asked to read excerpts from the script. Younger auditioners will be asked to participate in alternative activities in lieu of the readings. All students who audition will be cast.

Some auditioners may be called back for more readings on Tuesday, Jan. 14, at 7 p.m. Only those who are specifically contacted about these call-backs should attend. The cast list will be posted no later than Wednesday, Jan.

15, on DeltaARTS social media outlets and through the Remind app, for which auditioners and their parents will be asked to sign up at auditions.

Adapted for the stage by Richard R. George, this amazing adventure of James Henry Trotter will fulfill the fantasy of anyone who has ever dreamed of escape. Roald Dahl’s story comes hilariously to life in this delightful dramatization that reveals the wickedness of some, the goodness of others, and the indecision encountered by many when they are faced with crises.

Making his CYT MainStage directorial debut is Deon’ta White, who was an instructor for CYT’s 2019 Summer Conservatory. Assistant Director/ Stage Manager for the production is Truman Jepson.

Both directors recently graduated from The University of Memphis’ BFA Musical Theatre program and have performed for schools all over the area with Memphis’ own theatre troupe, Voices of the South (VOTS). They have also helped coordinate VOTS’ annual Memphis Children’s Theatre Festival for the past few years. Both have an impressive professional background and experience in education.

This production of “James and the Giant Peach” is sponsored by Dr. Trent Pierce, Family Practice Center of West Memphis. The 2019-2020 CYT season is sponsored by The Morris Foundation and Evolve Bank & Trust.

Parents or guardians of all cast members will be required to attend a parent information meeting at Faulk Elementary School in West Memphis on Thursday, Jan. 16, at 6 p.m.

This will also be the first rehearsal, so cast members should attend as well. All rehearsals will take place at Faulk unless the cast is otherwise notified.

Performances of “James and the Giant Peach” will take place March 5, 6, and 7, at Academies of West Memphis Performing Arts Center.