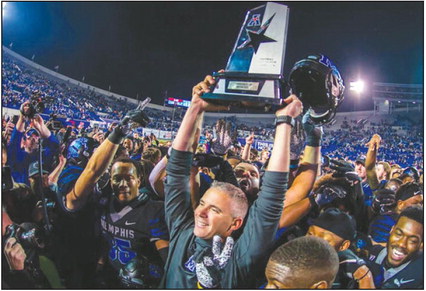 As for being an American Athletic Championship game, that will have to wait a week when the same two teams meet again. If it’s anything like Friday’s game, expect another four quarters of what a crowd of 36,472 witnessed.

Memphis outlasted Cincinnati, 34-24, to earn its third-straight West Division title and the right to host next Saturday’s conference title game. It will be the first time a league title game has been played at Liberty Bowl Memorial Stadium.

“I’m so proud of our guys to come out (on) this stage and to win our third straight division title,” said Memphis coach Mike Norvell. “That’s pretty remarkable. Not many programs can do that.

“Now we get the opportunity to host a conference championship. That’s something you always aspire to do. It’s going to be a great opportunity for all involved. I’m so proud to coach these guys, all the work they’ve put in. It’s a team with tremendous heart, tremendous character.”

The Tigers were able to amass 432 yards against one of the league’s best defensive squads. Quarterback Brady White passed for 233 yards and two touchdowns, while running back Kenneth Gainwell gained 87 yards on 15 carries. Receiver Damonte Coxie had six catches for 145 yards and a touchdown.

Cincinnati (10-2, 7-1 American) had already clinched the East Division title before Friday’s game. Memphis (11-1, 7-1) clinched the West title Friday and became an 11-win team for the first time in the program’s history.

After a 37-point first half, neither team scored in the third quarter. The Bearcats’ four possessions ended this way: punt, interception, fumble, on downs. The Tigers’ three possessions?

But the UofM’s final third-quarter drive resulted in a big-play score. Extending into the fourth quarter, the drive was capped by a perfectly executed trick play. White handed off to Patrick Taylor, who took off around right end and flipped to receiver Kedarian Jones, who tossed back to White. White then lofted a deep ball to Damonte Coxie, who caught it at the Bearcats’ 2 and fought his way into the end zone for a 27-17 lead.

“I put it out there for my guy and he made the play,” White said of the trick play that had been in the playbook for a couple of weeks. The Bearcats answered with some good fortune and a key third-down conversion. A fumble by the Bearcats appeared to be recovered by the Tigers near the Cincinnati 33, but was ruled out of bounds.

On the ensuing play, Ben Bryant found Alec Pierce for 51 yards to the Tigers 16-yard line. Two plays later, Bryant rambled in on a keep from 12 yards out to trim the Memphis lead to 27-24 with 10:27 to go.

In the final 10 minutes, the Tigers overcame a White interception with an impressive three-and-out and followed by scoring the clinching touchdown on a 29-yard run by Antonio Gibson with 3:16 remaining for a 34-24 Memphis lead.

In the first half, the Tigers built a 17-3 first-quarter lead, starting the game with a 94-yard kickoff return for a touchdown by Chris Claybrooks.

After Cincinnati’s Sam Crosa followed with a 30-yard field goal that capped an 11-play, 63-yard drive, the Tigers marched 77 yards for another score.

On second-and-goal from the UC 9, Jones caught a pass from White inside the 10-yard line and bulled his way into the end zone after encountering resistance at the UC 2.

The defense held and White engineered a 57yard drive that began with a 44-yard pass to Jones that gave the Tigers a first down at the UC 29. Seven plays later, Riley Patterson booted a 34-yard field goal for a 17-3 advantage.

The Bearcats began chipping away at the Memphis lead in the second quarter.

Leonard Taylor hauled in a 4-yard touchdown pass from Bryant at the end of a 12-play, 85-yard drive early in the period. With 2:54 remaining in the half, an 80-yard drive ended with Warren scoring from three yards out for a 17-17 tie.

The Tigers ended the firsthalf scoring with a 28-yard Patterson field goal, set up by a perfectly thrown 54yard pass to Coxie. Coxie caught the pass over his shoulder near the Cincinnati 40 and weaved his way to the 10-yard line before being brought down.

Next Saturday’s championship game will kick off at 2:30 p.m. and be carried by ABC.

• The 94-yard kickoff return by Chris Claybrooks to open the game was the third by the Tigers this season.

• The Tigers have returned 11 kickoffs for a TD in the last four years, the most by any team in the nation.

• Memphis earned its 11th win during the regular season, a first in program history.

• The Tigers played their 20th non-Saturday game since the start of the 2014 season. Memphis is 19-1 in those games.