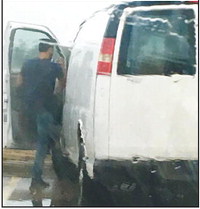 ralphhardin@gmail.com Maybe it was nothing.

But, maybe it wasn’t nothing.

But either way, Tory Hayes decided it was better to be safe than sorry when he spotted an out-of-state van in his community over the Thanksgiving holiday.

“I pulled up at Marion Wal-Mart today, and about a minute after a white van with California tags pulled right beside me,” Hayes posted to his Facebook page Saturday afternoon.

“There were two guys who got out with their heads down and proceeded to go inside of the store.”

While there’s nothing illegal or even necessarily suspicious about that, something didn’t sit quite right with Hayes.

“At first glance, I really didn’t take notice of it, but then I felt a leading to look back over at the van again to check for any locks on the doors.”

A closer examination of the vehicle raised some alarms.

“I couldn’t really tell if those were locks on the sides of the door, so I backed my car up and immediately noticed that on the rear door of the van, there wasn’t any door handle — or no keyhole on it whatsoever — to even open the door, which was kind of strange to me…

a van with no door handles or keyhole… I’m just saying.”

Hayes then decided to do a little amateur detective work.

“So, then I pulled right across from the white van to wait and see if either of the men were foreigners,” He said. “The reason being was because it’s been reported that a number of foreign men from other countries have been coming to the U.S. just to abduct young women and children. And the reason why many of the victims are never found again is because they are taken and hidden in other countries to be trafficked or sold for organs.”

Hayes said he was not convinced that there was anything untoward being done, but he wanted to raise awareness in the community.

“Now I’m not a conspiracy theorist, nor am I someone that’s here to play on people’s emotions but I seriously just want to help make everyone aware that these things are really happening all over now and they are getting even closer to home,” he said.

“So, my advice to everyone is please be extra safe and stay watchful when going out in public,” he said. “But most of all, be very prayerful these days for our women and children because the devil is still out to kill, steal, and destroy at all costs.”

Although Hayes did not contact law enforcement, his post did include photos of the van, including the tag number. The posts was shared more than 1,100 times over the weekend.