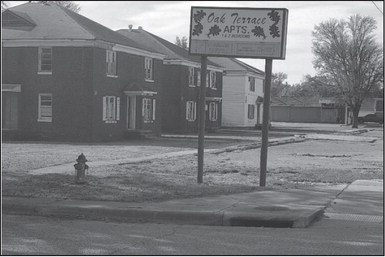 City officials at odds over plans to tear down commercial properties

Councilman Charles Wheeless pitched a fit during a the last city council meeting when bid openings were considered.

At issue was a bid to tear down the blighted Oak Terrace Apartments across from Big Star on east Broadway. Wheeless saw it as a type of welfare for a private business and voiced his objections.

“Why are we doing cleanup for a business man with plenty of money?” asked Wheeless.

Wheeless said he had submitted blighted houses in his ward and wondered why those houses had been overlooked in favor of a real estate company holding. The Ward 3 councilman directed his comments at City Planning and Development Director Paul Luker.

“I brought a list to your office earlier in the year and none of its on our list,” said Wheeless.

Councilman James Pulliaum suggested the bid be tabled and discussed later between he planning office and concerned city council members. As city council set the matter aside for reconsideration, a Memphis news channel complicated matters with an errant report.

With footage of Mayor Marco McClendon and his personal advisor Steve Jones strolling through the Oak Terrace property, the television station reported demolition would begin on Nov. 21. City council had yet to consider the demolition bid. “The report was in error,” said Luker. “They misunderstood.”

City Communication Director Nick Coulter explained after being asked how a demolition could begin without city council considering the bid.

“If it doesn’t turn out to be those apartments, it’ll be another place on Broadway,” said Coulter.

Through it all Luker said the city approached the property owner and offered the demolition dollars.

when the city comes and says you property needs to be demolished” said Luker, who worked out the deal.

Luker said the owners had knocked down a couple of buildings already and the bid to take down the remaining five buildings and slabs was a bargain.

“Its Community Development Block Grant funded project,” said Luker. “We’ve torn down commercial properties with this money before. Its for blight. We try to use it for housing. Some years we have more houses than block grant funds.”

Luker said an old Toyota dealership that had become an ‘eyesore’ after turning into a series of used car dealers on Walker and East Broadway was demolished from the same federal funds and set a precedent for the Oak Terrace demolition.

Luker said the citizens wanted projects like this done. Redevelopment on the Broadway corridor was a priority in the new city long range growth and development plan.

“Code enforcement and ridding the city of blight were big topics early on in our Grow 2040 focus group discussions,” said Luker.

“We work real hard at being good stewards of the taxpayer dollars whether its federal tax funds or footed by local tax payers. I’ve never seen a bid opening tabled before.”

The property had not been condemned but the Realtor owner and the city agreed for the city to proceed.

“Our residential houses have always been a priority,” said Luker. “We have had years where there were more qualified houses than demolition funds, but not this year.”

“Part of the problem is not enough houses qualified for the program this year,” said Coulter. “So the mayor has asked each city council member to bring in two