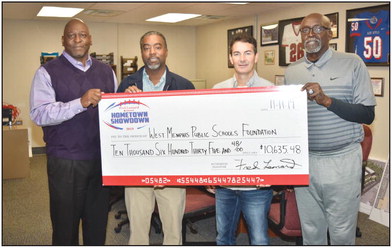 WM School District The final numbers are in from the Fred Leonard State Farm Hometown Showdown 2019.

The West Memphis-Marion high school football game at Hamilton-Shultz Field on Sept. 29 was a big pregame event that Leonard, Grandon Gray and Mike Chesney of JR& K Printing sponsored and pieced together.

It included a pregame event that featuring food, games and music.

With West Memphis serving as host of the game which was won by the Blue Devils 41-40 in overtime, 50 percent of the proceeds went to the WMPSF in the amount of $10,635.48.

The overall total for the St. Jude Children’s Hospital Game Day Give Back was $18,575.10 with Team Blue Devil besting Team Patriot, Team ASU Mid-South and Team Fred Leonard by raising $7,950.90.

Mike Chesney of JR& K Printing contrived $1,516.10 to both schools for the official Game Day T-shirts with $532.95 going to the West Memphis Athletic Booster Club.

Leonard said next year’s event, which Marion will host, is going to be an even bigger event.