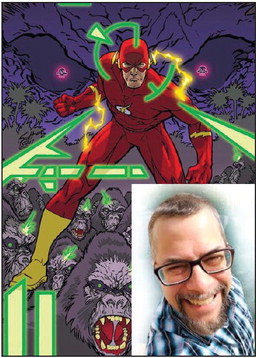 When Scott Kolins was six years old, he and a group of friends set off to go to the dime store to buy some model air planes.

But when he walked past a magazine rack, a comic book with a big green monster on the cover caught his eye. Kolins was a big fan of monster movies with creatures like the Wolfman and King Kong which used to be staples on late night television.

Instead of spending his money on an airplane, he bought two of the monster magazines instead. When his friends found him a few hours later, he had already read both of them — at least twice — and has been hooked on comic books ever since.

“I first book I picked up was The Incredible Hulk,” Kolins said in a telephone interview. “And he’s still one of my favorites. I tracked it down later and it was the Wen-Di-Go story that led into the Wolverine story.

From then on, Kolins knew he wanted to be a comic book artist.

Kolis, who will be one of the featured guests at the Memphis Comic Expo on Saturday and Sunday, has drawn comic books for Valiant, Marvel, Dark Horse, Image, and Malibu, and major characters like Spider-Man, The Avengers, but is best known for his work at DC on The Flash.

“It’s one of those things where you never know where your career is going to take you,” Kolins said.

“I liked Flash as a kid. He wasn’t one of the major ones that I collected. But Flash was one of those things that just fit like a glove for me.”

Kolins began drawing his heroes from the comics when he was about ten years old back in the late 1970s. He was an avid comic book reader, but said he never really paid attention to the credits of the names of the artists who were drawing his favorites.

“Back then your only choices in comics were what you could find at the drug store or whatever books your friends had,” Kolins said. ‘So we always had a network with friends to find out what books they had. At one point I remember reading Iron Fist which I thought was really cool. Then another friend showed me X-Men, which I thought was pretty cool too.”

Kolins said he began to notice that he liked some comics better than others because of the art, and finally realized that some of his favorites were drawn by the same artist. The first comic book artist that he recognized by name was John Byrne, who drew both Iron Fist and X-Men.

“John Byrne was the first time I pieced together a name with an artist,” Kolins said. “I was able to spot different styles that I liked or different storytelling that I liked and could say ‘hey, this was all drawn by the same guy.’ So Byrne was the first one that I realized crossed books. Then I knew to look for his name. I also liked Mike Grell who did Green Lantern, George Perez on Teen Titans, and Herb Trimpe who worked on Hulk.”

By the time he graduated high school, Kolins said he knew that he could turn his passion for drawing into a career in comics. When he couldn’t find a college that had the kinds of art classes he was looking for, Kolins enrolled in the Joe Kubert School of Cartoon and Graphic Art in Dover, New Jersey.

The Kubert School is only a short train ride away from Manhattan where both DC and Marvel were located, and Kolins said he was able to start getting interviews with editors at the major comic book companies.

His first job was with Valiant, which was founded by former Marvel Comics editor-in-chief Jim Shooter. “By the time I was finishing up, a lot of my classmates had just been hired by Valiant,” Kolins said.

“My friends had gotten hired as inkers or colorists, and Valiant was looking for more pencillers at the time.”

Kolins didn’t last long at Valiant, but said Shooter got him his first penciling job at DC, and artist and editor Bob Layton connected him with John Romita, an artist at Marvel, who hired him to be a part of “Romita’s Raiders” to do in-house art corrections. “Romita was wonderful,” Kolins said. “He said I was good enough to get work.

Eh, he probably stretched the truth. But he said if I wanted the job I could have it. So I took the job at Marvel and did art corrections for them for about six months.”

Kolins said during that time he walked the halls at Marvel knocking on every door and talking to every editor he could until he finally began getting other drawing jobs.

At Marvel, he illustrated titles like Excalibur, Hawkeye, The Amazing Spider-Man, The Thing, The Avengers, Wolverine, and The Fantastic Four.

Kolins then shifted over to DC where he worked on Green Lantern, Justice League, Legion of Super Heroes, and eventually, The Flash. “After I finished my run on Legion of Super Heroes, Mike Carlin, who was the editorial head and a great backer for me, put me up for the job,” Kolins said. “Joey Cavalieri was the editor of The Flash at the time and called me up to do a fill-in issue. In hindsight, I think it was a test.”

Kolins said The Flash was the turning point in his career. It was also the beginning of a satisfying collaboration with writer Geoff Johns. The two teamed up for a 29 issue run which produced some of the most well remembered story lines in the title’s history including “Blitz,” which saw the return of Flash villain Zoom.

“I had just worked with Geoff on Stars and Stripes,” Kolins said.

“Geoff and I just clicked.

He actually flew up to see me and we hung out and really talked about our plans for The Flash. I think we brought two sides to The Flash. I was the casual fan and he was the die hard fan. Flash was literally his favorite character. We’d talk about every issue before it was ever written or drawn. It was great.”

Kolins was just one of the many stars on hand for this past weekend’s Memphis Comic Expo at the Agricenter International. Other guests included artists Chris Claremont, David and Meredith Finch, writer Scott Snyder, Memphis pro wrestling legend Jerry Lawler, as well as Memphis NBA mascot Grizz and the Grizz Girls.