Rutledge announces advisory to retailers on vape sales to teens 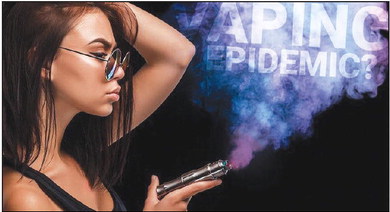 Attorney General: ‘if you are selling illegal products to Arkansas children, prepare to face consequences’

LITTLE ROCK — Arkansas Attorney General Leslie Rutledge today announced educational and enforcement initiatives in advance of the State’s first Youth Vaping Summit held at Arkansas Children’s. Rutledge sent a letter to eBay demanding the removal of all electronic nicotine devices and products from its online sales platform and urging it takes steps to enforce its own policy against the sale or advertisement of tobacco products. In conjunction with Rutledge’s letter to eBay, she issued an Enforcement Advisory to 100 online e-cigarette retailers, warning these retailers that it is illegal to sell or ship any tobacco products, including e-cigarettes and e-liquids, to consumers in Arkansas.

The advisory warns of potential legal action if businesses are found selling to minors over the internet.

Today’s announcement is a multifaceted approach also includes the statewide public service announcement educating Arkansans on the dangers of vaping.

“Misinformation and opportunities for youth to illegally buy vaping products online have contributed to the vaping epidemic across the nation and our State. It is my responsibility to educate our youth on the dangers of vaping and hold those accountable who break the law,” said Attorney General Rutledge. “With more children and teens becoming sick and addicted to nicotine, we cannot stand idle and watch a health crisis fester within our State. If you are selling illegal products to Arkansas children, prepare to face consequences.”

Attorney General Rutledge is warning online retailers against shipping tobacco products into the State as it could be considered a violation of the Arkansas Deceptive Trade Practices Act and violators could face civil penalties up to $10,000 per violation. This prohibition exists in order to keep these products out of the hands of Arkansas’s youth, but sellers will face additional penalties if products are sold to children.

The letter sent to eBay Inc. President and CEO Devin Wenig by Rutledge urges the company to comply with its own policy banning the sale and advertisement of tobacco products on its site. A review of eBay.com shows an extensive list of e-cigarette related products and no age verification process. In June 2018, similar action was taken when Rutledge successfully sent a letter to eBay and other retailers in banning the online sale of the extremely potent unwashed poppy seeds on their websites.

Along with the enforcement advisories and communication with eBay, Attorney General Rutledge has released a public service announcement addressing the dangers and damage caused by vaping.

The public service announcement can be viewed on various networks and cable stations throughout the State and can be found on Rutledge’s YouTube page.

Attorney General Rutledge is hosting the Youth Vaping Summit for parents, medical professionals, educators and legislators at Arkansas Children’s Hospital and Bentonville High School to discuss how to stop the youth vaping epidemic in Arkansas.

According to the Centers for Disease Control and Prevention (CDC), 27.5 percent of high school students used e-cigarettes, often referred to as vaping, in 2019.

Arkansans who have questions can email the offi ce at oag@ArkansasAG.

Leslie Carol Rutledge is the 56th Attorney General of Arkansas. Elected on November 4, 2014, and sworn in on January 13, 2015, she is the first woman and first Republican in Arkansas history to be elected as Attorney General. She was resoundingly re-elected on November 6, 2018. Since taking offi ce, she has significantly increased the number of arrests and convictions against online predators who exploit children and con artists who steal taxpayer money through Social Security Disability and Medicaid fraud. Further, she has held Rutledge Roundtable meetings and Mobile Office hours in every county of the State each year, and launched a Military and Veterans Initiative. She has led efforts to roll back government regulations that hurt job creators, fight the opioid epidemic, teach internet safety, combat domestic violence and make the office the top law firm for Arkansans. Rutledge serves as Chairwoman of the National Association of Attorneys General Southern Region and re-established and cochairs the National Association of Attorneys General Committee on Agriculture.