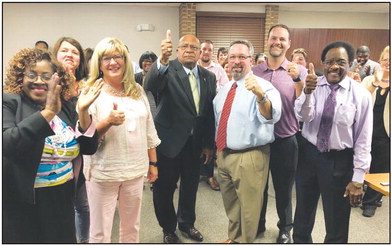 ralphhardin@gmail.com Following a community- wide effort to get the vote out, West Memphis School District officials breathed a collective sigh of relief when the vote totals began coming in Tuesday night on a proposed millage increase for the district.

With a minimum of vocal opposition in the community, the 7.5 mill increase passed easily with more than 80 percent of votes cast in favor of the millage to “build the future together,” as the campaign slogan asked.

The increase will take the West Memphis School District’s millage rate from 29 mills to 36.5 mills.

Those extra tax dollars will provide matching funds for millions of dollars in state funding. That money will be used to construct two brand new junior high schools in the district — a new West Junior High School and a new Wonder Junior High School. The new school will absorb East Junior High students. West Memphis superintendent of schools Jon Collins was emotional as he expressed his gratitude to community voters.

“Thank you, West Memphis,” said Collins as supporters gathered at the WMSD Central Office to watch the results get counted. “Tonight, our citizens passed a 7.5 millage increase to move the West Memphis School District to an improved millage rate of 36.5. This is a great example of putting the best interests of students first. With this new bond issue, WMSD will be able to move forward with the design and construction of two new junior high schools.”

With all but one precinct reporting (Maddux Elementary polling data was unavailable overnight due to a technical issue) the vote totals stood at 1,696 votes in favor of the millage with just 319 against it. “Thank you for investing in our students and believing in our community,” said Collins, “on behalf of our kids.”