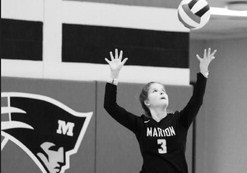 Marion School District Marion volleyball (8-2 overall, 3-0 5A East) made quick work of the Searcy Lions (2-6, 0-3), sweeping them out of Patriot Volleyball Gymnasium on Tuesday night. The Pats used a total team effort to defeat the Lions in a night where coach Lisa Beasley said the team showed that they are continuing to grow.

“I’m really proud of the girls and the way they played tonight,” Beasley said. “I know I can be tough on the girls, but they have done everything we’ve asked of them and have continued to better the game since the jamboree at the start of the year.”

One aspect Beasley said in particular has improved is the team’s play following a timeout. A timeout has the potential to kill the momentum of a set, so she said she was proud of the way they continued to play hard after the stoppages.

“We started slow, but I liked the way we were playing by the end of the night,” Beasley said. “We’ve made an effort to keep runs going after the other team calls a timeout, and I thought it paid off against Searcy.”

When asked about star players of the game, Camille Moncrief was the first name that came to mind. Beasley said Moncrief’s game has improved with each game this season, and that the junior has been working harder than ever in practice.

Other notable player of the game included Kora Wilson, who made some key digs, and Kersten Jackson, who had her name all over the stat sheet. Wilson made some of the biggest plays on a night where the Patriot defense was near lights-out.

Beasley also noted that the communication between the girls might have been the best it’s been so far. The talk on the court was a major factor in the 25-11, 25-15, and 2515 set wins.

12. The Rams are an experienced team with some big seniors, and they own sweeping conference wins over West Memphis and Greene County Tech, but were swept by Mountain Home to start conference play.

For fans that can not make the trip to Paragould, a live stream will be available at marionpatriots.com or the Marion Patriots Athletics app. The night featuring the seventh grade, Junior High A & B teams, and High School A & B teams will begin at 5 p.m.