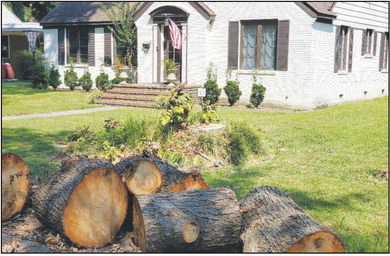 Following complaints from at least three West Memphis councilmen during a recent public works committee over large tree stumps and yard debris being piled up along city streets and discarded appliances and furniture cluttering neighborhoods, Assistant Police Chief Robert Langston said upon hearing of the meeting that extra enforcement efforts will be put in place to address the illegal dumping problem.

Most of the yard debris and large tree stumps that are appearing are the result of recent storms and high winds that swept through the area recently but Langston said it is the responsibly of the homeowner to dispose of the oversized and heavy debis and not the city.

During the Tuesday Public Works Committee meeting Councilmen Willis Monday, James Pulliam and Charles Wheeless made reference to the number of locations where home- owners or occupants have placed excessive amounts of trash and debris on the side of the neighborhood streets expecting city crews to haul it off.

The councilmen mentioned areas on Cooper and Roosevelt Streets where large tree debris had been stacked along the side of the city streets which they pointed out is in violation of a city ordinance.

For the crews to use city equipment to haul off oversized and heavy debris only causes equipment damage.

It was suggested that Langston be contacted and that an extra effort be made on the part of Code Enforcement Officer Mike Antel to make contact with the responsible homeowners or occupants and inform them that they are in violation of the city ordinance and that it is their responsibility to remove the debris or face a citation. Langston said residents must understand that the city’s sanitation crews will not pick up brush and limbs that are larger than 10 feet long by six feet wide and three feet in height. He also said there must be a minimum six feet of clearance on each side of the homeowner’s curbside trash or debris.

“Residents who have their trees cut down by a professional

understand that it is the responsibility of that tree service to dispose of the brush, limbs and stumps,” Langston said.

Langston said Officer Antel has been informed of the latest complaints and said he will be in contact with the responsible parties and instruct them that they have seven days to remove the debris or they will be fined.

Langston assured the three council members that their concerns will be addressed immediately.