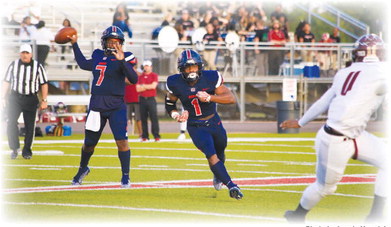 Marion School District The Marion Patriots (1-1 overall) did not have enough offense last Friday to overcome the running game of the Wynne Yellowjackets (1-0). All of the Jackets 290 yards came on rushing plays, keeping the Patriot offense off the field for long periods of time.

Marion was forced to play as close to perfect as they could, running only 53 plays after snapping the ball 80 times against Blytheville. Wynne averaged just under five yards per play, keeping the Marion defense on the field for extended stretches of time. “We just need to focus on executing our individual assignments,” Marion coach Keith Houston said.

“We made some plays, they happen to make more so kudos to them. We played a good team and they happened to come out with the win.”

Marion quarterback Daedrick Cail completed 15 of his 25 passing attempts for 180 yards and two touchdowns. Both touchdowns came off jet sweeps to senior Brandon Calvert, who caught three passes for 37 yards.

The Pats had 103 rushing yards against the Jackets and were led by senior Anthony Price with 53 yards.

Not far behind Price was senior Antonio Grays with 48 yards on six carries.

With Wynne only attempting two passes all night, the majority of the burden to stop the Jackets fell on the Patriots’ defensive line. Marion nose guard Justin Scott led all defenders with six tackles of his own and was also credited with 11 assists.

The defense also recovered a fumble and recorded four tackles for loss.

Marion trailed the Jackets 14-0 in the second quarter, but Calvert would answer back with his two touchdowns to tie the game up.

Wynne would find the end zone again before the end of the quarter, and the teams went to halftime with the Jackets leading 21-14.

Price found the end zone on a 14-yard rush in the third quarter to tie the game at 21 while the defense held the Jackets at bay for the majority of the half. However, Wynne would reach the end zone with under a minute to play, but a missed extra point only gave the Jackets a 27-21 lead.

Surprisingly, the Jackets kicked an onside kick following the touchdown, giving the Pats the ball at their own 45-yard line.

A 22-yard pass on the first play after the kickoff gave Marion a fresh set of downs at the Wynne 33yard line.

However, a fumble on a completed pass rolled into the endzone, where the Jackets would recover and force a touchback. Wynne took a knee and escaped Patriot Stadium with a win.

Up next for Marion is the Battle of the Patriots against Little Rock Parkview. Marion won last year’s game 20-19 in a game where Kentreal Jones rushed for three touchdowns.

This year’s game will be hosted at War Memorial Stadium off of Markham Street in Little Rock. A live stream of the game will be available at marionpatriots.com and the Marion Patriots Athletics app.