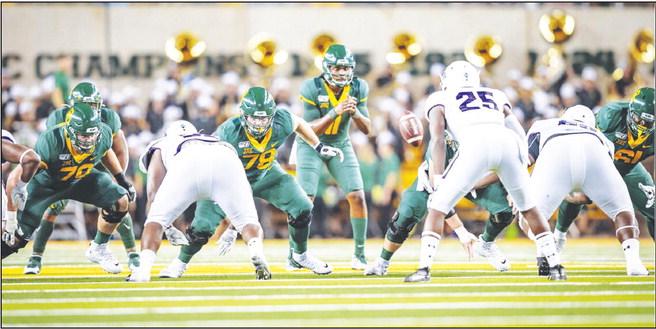 A former Earle Bulldog notched his first touchdown as a Baylor Bear over the weekend.

Gerry Bohanon threw a 9-yard touchdown pass Saturday in the 3rd quarter of Baylor’s 56-17 win over Stephen F. Austin. He was 5 of 6 passing for 51 yards, plus 6 carries for 84 yards in the victory.

“When Gerry Bohanon checked into the game in the third quarter of Saturday night’s dismantling of Stephen F. Austin, there was a notable shift in energy in McLane Stadium,” said J.D. Pickell, a contributor for SicEm365, Baylor Univeristy’s sports site.

“Baylor Nation had waited a long time to see No. 11 behind center and Bohanon did not disappoint.”

Bohanon showed off his arm and his legs, proving that when given the opportunity, he will be a dual threat QB for the Bears. The highlight, of course, was the touchdown pass. Bohanon connected with wide receiver Tyquan Thornton for the score.

“It felt good. I mean, Tyquan, we’ve been living together since we first got here,” said Bohanon.

we’re blood basically, so we were kind of excited to share that moment.”

While Bears starting QB junior Charlie Brewer will still be lining up behind center for Baylor, Bohanon showed fans and the coaching staff that he is ready to play if called upon.

Bohanon was a standout for the Earle Bulldogs during his high school career and fielded numerous D-1 offers, including Arkansas and Ole Miss, before choosing to take his talents to Baylor.