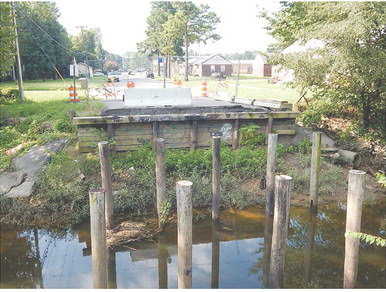 After focusing on the City of West Memphis’s sanitation issues for the past several months, the West Memphis Public Works Commission turned to other issues during its August meeting.

With Mayor Marco Mc-Clendon having launched the city’s new trash routes the day before the meting and commissioners deciding to review the results of the new operation in September, other agenda items were back in the spotlight.

Commissioners heard an update on the stalled Redding Street Bridge rehabilitation and took in a status report on other road projects for the balance of the meeting.

The support structure at the bridge over Ten Mile Bayou at Redding Street was more dilapidated than initial inspections revealed. The city had to wait out the high ground water this year to get a complete assessment after the contractor reported more problem in the rotted pilings and the crossbeam called a ‘ben’t according to City Engineer Amanda Hicks.

“We are awaiting a redesign on the projects,” said Hicks. “When we pulled out the beams it pulled out the pilings. There were a lot of unforeseen things we ran into. More than likely we will have a box culvert there. It will be completely city funded.”

In other Public Works business:

• Plans to expanded the South Loop were 30 percent complete. Hicks outlined the next steps.

“We are working on all the right of ways and will complete the driveway locations by late September,” said Hicks.

The amount of streets overlaid this year set a new record for the city.

“We added a few streets based on a petition we received at the beginning of the year.

The Arkansas Department of Transportation has begun resurfacing Highway 70 (Broadway) from the Saint Francis County line east to Missouri Street.

• A new traffic signal was slated for College Boulevard.

“It will be at the service road and begin in mid December,” said Hicks.

• Recycling topped 22,000 pounds for the month. The city hauled 500 tons of trash to the landfill during July.

• New trash and tire ordinances went into effect at the beginning of August.

Code Enforcement Officer Mike Antel had his eye on the new regulations.

“The new sanitation ordinance is in effect and I’ve been issuing four or five warnings a day,” said Antel.

The warnings give residents seven days to address the problem before a ticket with a minimum $100 fine would be issued.