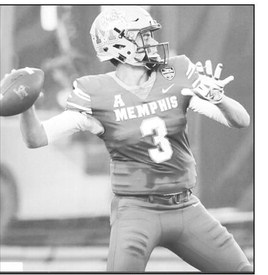 White one of 34 players earning notice from Association

White was one of two quarterbacks (D’Eriq King, Houston) from the league to be placed on the watch list. In 2016, The American was represented as USF quarterback Quinton Flowers won the CFPA National Performer of the Year Trophy.

This is not the first time in White’s career he has been recognized by the CFPA.

With 358 yards and five touchdowns in his Memphis debut against Mercer last season, White was an honorable mention selection for the CFPA National Performer of the Week.

White finished his 2018 season with 3,296 yards and 26 touchdowns, totals that rank fourth on the individual single-season record list.

The CFPA recognizes weekly, annual, and multi-season (career) award recipients and in their announcement said winners are “selected based upon objective scientific rankings of the extent to which individual players increase the overall effectiveness of their teams.”

The 2019 CFPA National Performer of the Year Trophy is a 22-inch K-9 optic crystal tower with eight-inch crystal football on top. All FBS players are eligible for the award. The award winner will be announced January 15, 2020.

Season tickets and the Tigers’ 3-game pack are on sale now at www.GoTigersGoTix. com.