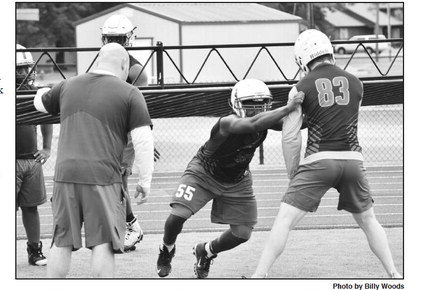 WM School District He has to replace 20 starters this season, but the look on Billy Elmore’s face is not the one of worry.

After the West Memphis Blue Devils graduated 20 senior starters from last year’s conference championship team which went undefeated in the regular season and then advanced to the semifinals of the state playoffs, it would certainly be understandable for some panic in the team’s preseason camp.

Let the head coach himself explain. “Well, we had a really good summer, for one thing,” Elmore said. “Plus, I think we’ve got the program where we want as far as seniors manning most of the spots in the starting lineup. We’ll have another large group of seniors as our core this season.

Typically, you’d like for all your sophomores to play in JV games on Monday nights, a few juniors mixed into the rotation on the varsity and then mostly seniors lining up every Friday night.”

The Blue Devils are well into their first week of fall camp, ahead of the team’s early start to the regular season. For the second straight year, the Blue Devils will play their season- opener a week ahead of most of the rest of the state.

And because of the early start to the regular season, Elmore’s club will also have to play its preseason scrimmage a little earlier, too. The Blue Devils will travel to Batesville on Aug. 20 to take on the Pioneers for the fourth straight season.

The outstanding summer, which included some testy team camps against top Class 7A schools, has carried over smoothly into the fall camp, according to Elmore.

“We don’t know what’s going to happen when these guys go out for the first time and play,” he said. “Hopefully, however, we’re at the point in our program where we’re saying this every year because we’re playing so many seniors every Friday night.

In our conference and in our classification, if you’re starting a bunch of sophomores and juniors…you could be in a lot of trouble.

Unless they’re just a bunch of exceptional players. Last year we felt like we had good back-ups in all the positions where the seniors were starting.”

West Memphis is operating on a roster of 90 players, which Elmore said is the number he wants to keep every season.

“Hopefully next year we have to replace 18 or 20 starters again,” he said candidly.

The two returning starters should be very familiar to Blue Devil fans. On offense, the returnee is senior quarterback Owens McConnell, who was the game’s Most Valuable Player in last year’s Bank of England Mortgage Kickoff Classic in which he completed 14 of 25 passes for 198 yards and three touchdowns in West Memphis’ 35-0 win over LR Central.

On defense, senior linebacker Kendarious Moore, a University of Tulane commit, will be the ring leader after leading the Blue Devils in tackles in 2018.