‘Hogs on the Square’ set for return 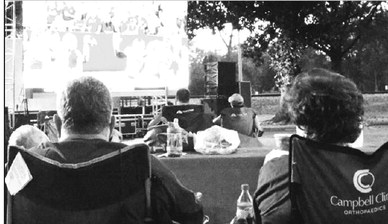 Call the Hogs on the big screen at Marion Chamber event

ralphhardin@gmail.com While the Arkansas Razorbacks will be down in Texas for the Southwest Classic, Hogs fans will still be able to be a part of a special local gathering of Razorback rooters, with a public watch party at the county courthouse.

On Saturday Sept. 28, the Marion Chamber of Commerce will turn the courthouse square into the biggest tailgate party in the county, as they present the third annual “Hogs on the Square” tailgate and watch party.

The University of Arkansass and Texas A& M will square off for the second straight year in the Southwest Classic, a throwback game honoring and highlighting the rivalry between the two teams that predates their move to the Southeastern Conference (Arkansas left the Southwest Conference in 1991; The Aggies followed suit two decades later, in 2012). And the local crown will gather to watch it all play out in front of a huge projection screen.

Organizers expect more than 200 fans to show up and cook out, tailgate and cheer on the Hogs, as Arkansas hopes to get back on the winning track this season. And a win against Texas A& M inside “the House that Jerry Jones Built,” Cowboy’s Stadium, would be a sweet victory indeed.

“Hogs on the Square” debuted in 2017, with Arkansas taking a shellacking from top-ranked Alabama, but the turnout was strong and city officials were eager to try it again last year.

“As far as I’m concerned, it was a great success,” Marion Chamber of Commerce Director of Economic Development Tracy Brick said after last year’s gathering. “Everyone had a great time. We had some pretty elaborate tents with game time tailgaters enjoying the usual game time fare. Others just brought a chair or a blanket. We had kids and older people. It was everything we hoped for.”

Brick said it was nice to see locals come out to enjoy the courthouse square — a formula she and city officials hope to replicate this year.

Now if only the Razorbacks could get a win… The 3rd Annual Hogs on the Square will be Saturday, Sept. 28, with start time to be determined after kick-off time is announced. Come paint the courthouse Razorback Red. There’s free admission, all ages are welcome, tailgaters are welcome, just bring your own seating and set-up.

Food trucks and other onsite vendors will be at the event, which will include a “Hog Pong” tournament and a kids’ play area.