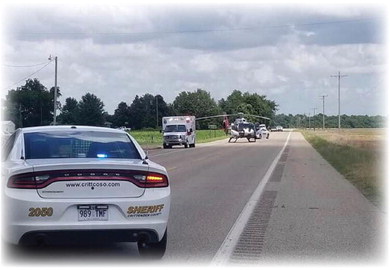 An Anthonyville man is recovering at Regional One Hospital after being shot twice in the chest Saturday afternoon. Clarence Howard, age 41, was shot at his home on Highway 147.

Crittenden County Chief Investigator Todd Grooms described the scene and said his investigators had developed a person of interest in the case.

Grooms said several people had been over to the house for a gathering Saturday morning when an argument erupted.

Everybody left after the incident. Detectives think the shooter may have felt snubbed earlier in the day and returned. Howard was alone at the time of the attack.

Grooms was hesitant to release the name of the suspect at the time but described the condition of the victim at the scene.

“He was shot twice to the right side of the chest,” said Grooms. “There wasn’t a lot of bleeding, and we became concerned about the victim’s ability to breathe so we called for an air ambulance. We followed up at Regional One Hospital for an update on Monday morning and they said he was in stable condition.”

Grooms said he had interviewed Howard when the victim was groggy after surgery.

“All he was able to do was give us thumbs up or down as we asked questions,” said Grooms. “We needed to wait to interview him again for a clear statement of what happened.”

On Wednesday, warrants were issued for B.J.

Brown for the shooting.

Sheriff Mike Allen took to social media asking anyone with information about the whereabouts of Brown to call Crittenden County Crime Stoppers at 870-732-4444. Information leading to an arrest could earn up to a $2000 reward.