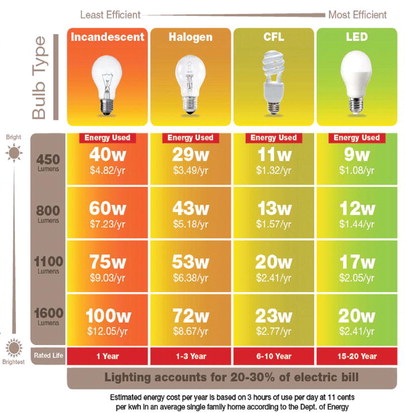 City will get rebate to switch to energy-efficient bulbs

Marion will take advantage of a rebate program through Entergy to replace old light fixtures with more energy efficient bulbs.

Mayor Frank Fogleman told the City Council that Energy Savers LLC, a Mississippi based contractor for Entergy, have been out to Marion and provided cost assessments on five city buildings to swap to LED lighting – the City Shop, City Hall, Woolfolk Library, water Department, and Chamber of Commerce.

“They have given us some proposals and basically it boils down to they would be switching us from either incandescent or fluorescent lighting to LEDs,” Fogleman said. “I don’t think they will change the fixtures, but they will retrofit lighting so that accommodates the LED bulbs and if there is work to the fixtures.”

Entergy will pay for a portion of the costs to retrofit those buildings with new LED lighting under its CitySmart Program.

“They have done a lot of cities in Arkansas,” said Building Inspector Jerry Kelley. “I checked with Jonesboro and they said they were pleased with the work. It’s kind of a no-brainer. We will save money from then on.”

The cost to retrofit the buildings are: City Shop: $7,500. Enter- gy will refund $5,571. The city will recoup its costs in energy savings in about six to seven months.

City Hall: $3,800. Entergy will refund $3,100. The city will recoup its costs in energy savings in about three months.

Water Department: $1,800. Entergy will refund $1,300. The city will recoup its costs in energy savings in seven to eight months.

Chamber of Commerce: $4,000. Entergy will refund $2,900. The city will recoup its costs in energy savings in six to seven months.

Fogleman said his church, Marion United Methodist Church, has done three of these projects and has seen savings.

The work comes with a five year warranty and the city does not have to pay until the work is completed. Entergy then has 14 days to come and inspect the work and 35 days to reimburse the city.

Fogleman said Energy Savers has also looked at Fire Station No. 2, which is currently being renovated, and will come back and assess it for possible savings along with Fire Station No. 1 whenever the city is ready to begin work on it.

Kelley said they also did an assessment of the Police Station but have not gotten the city any numbers yet.

The addition to the building which is currently under construction already has LED lighting.

“The back part we are already doing LEDs,” Kelley said. “But the front part of the building they could give back money on.”

The Council gave Fogleman permission to sign agreements on each building.

“I think this is something I think we should move forward on,” Fogleman said.