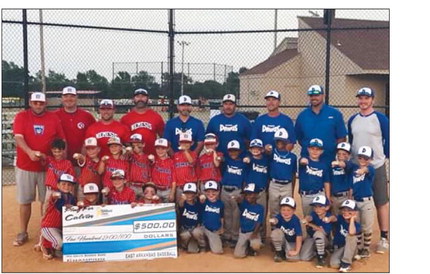 Tourney part of a big tourism weekend in West Memphis

Three big events in West Memphis drew big groups of tourists filling venues across the city. Tilden Rodgers Park and the Marion Rose Complex spilled over with 67 boys baseball teams drawing 2,500 supporters to the park. A local golf tournament brought people out. Finally, that last and biggest dance competition of the year packed out the civic auditorium. The three events drove more than $25,000 into the local economy and served to expand the spotlight on West Memphis as a regional weekend tourism event hub on the Interstate crossroads.

“Of the 67 teams, 61 were from out of town – filling hotels, restaurants and spending money on our county,” said Martin. “Using the national model, over $220,000 in revenue was spent in our area because of the tournament in less than three days.”

The tournament raised $7,000 for St. Jude’s. One team traveled from Nebraska to play the tournament and visited their teammate in the hospital. Net concessions proceeds went to the Boys and Girls Club.

Martin declared the event “brought baseball events back to West Memphis.” He lobbied for expansion in the park and at the Marion Rose Complex and urged citizens to look at the display signs around the park picturing planned improvements. He believed more big tournaments and the corresponding revenue boosts would follow the improvement projects.

“If you build it, they will come,” said Martin.

Convention and Visitors Bureau Executive Director Jim Jackson was in complete agreement and pointed to two other successful weekend events in the city that brought people out to spend money at hotels, restaurants and stores in the city.

“As you drove around town, visually you could see uniforms at restaurants like Applebee’s,” said Jackson. ”The tournament was single elimination with a four hour spread between games. So teams either had to hang out at the park or go somewhere to eat or shop.”

One golf tournament was held at a private club. And a big crowd filled the thousand seat civic auditorium.

The auditorium went through a remodel over the last two years with upgrades intended to draw dance teams.

”We had our last and largest dance competition this weekend this weekend and there was a big golf tourney at Meadowbrook,” said Jackson. “That was a lot going on.

The parking lots were jammed at Tilden Rodgers Park in West Memphis as 67 boys baseball teams slugged it out in a single elimination tourney. The three day event benefited St. Jude’s and drew and estimated crowd of 2,500 supporters. The large tournament field pointed to the need to improve the park to draw more big tournament play.