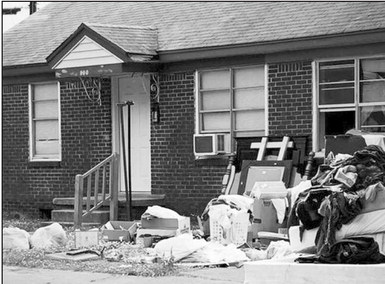 City officials tired of unchecked rubbish in the community

City residents may soon have to bag yard waste in clear bags, cut tree limbs down to size, and limit tire storage, under an ordinance headed to city council to consider. Public Works commissioners sat on the new ordinance for five months but in its June meeting recommended it to the full city council with an emergency clause that would put it in effect by the Fourth of July weekend.

The provisions in the ordinance limit tree limbs to a ten inch diameter and six foot lengths. The measure will reduce wear and tear on the claw truck.

Bigger limbs exceed weight handling limits on the grappling truck. The city will not pick up limbs produced by tree services.

The proposed ordinance stated, “it is the homeowner’s responsibility to remove any excess yard waste by business doing work on the property.”

Furthermore, limb piles with oversized branches “will not be serviced and if the pile is not disposed by the property owner within a week a warning and fine schedule starts.

Same goes for piles of furniture. Landlords often stack tenant clean-outs on the side of the road. The proposed ordinance would put the responsibility for removal on the landlord or homeowner.

The proposal also limits tire storage to four per household. Tires must be stacked on the side walls, be kept out of the sun and rain. For its part, the city would begin to offer publicly announced special tire pick up days twice a year.

Commissioners embraced beefed up fine schedule to impose a deterrent. The costs were uniform, the same for any violation under the proposed ordinance, whether its not using a clear bag, leaving a 40-foot tree in the road, leaving an entire household’s furnishings curbside, or dumping a truck full of tires illegally.

The items will not be picked up by sanitation. If they remain after a week the property owner would be issued a written warning. After another seven days to correct the action the violator would be ticketed counting for a for a second offense. A second offense in a 12 month period costs not less than $300. The third offense in a rolling year starts at $500. Finally a fourth offense carried a $1,000 minimum.

City Engineer Amanda Hicks had been asked by the public works commissioners to draft a new ordinance and bring the sting of the fines up to date. After comparing ordinances in comparable Arkansas cities and looking at fine schedules she drafted the ordinance and placed in the hands of the commission which sat on it each month without tabling or acting on the proposal. She brought it forward again at the June meeting.

“I had passed out the sanitation ordinance and at first I tried to ask for comments,” said Hicks.

“This is the same curbside trash ordinance I’ve had out for a while.”

After a wandering 35 minutes of casual meandering through sanitation complaints, and report items that followed on the agenda, City Councilman James Pulliaum returned to the ordinance and asked for immediate enactment under an emergency clause. He said the new ordinance could not start soon enough.

“That’s what’s backing up all the trash, all the things we aren’t supposed to be picking up,” said Pulliaum. “We truly need to stop it, people throwing stuff out of houses and things like that. They need to realize we ain’t picking that up. I am sure we can add it to the city council agenda.”