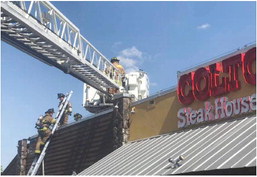 Council agrees to preliminary fixes ahead of May meeting

Marion will go ahead and begin preliminary work on the renovations to Fire Station No. 2, but will hold off on construction until the full City Council gives their approval to the proposed design.

The Police and Fire Committee told Building Inspector Jerry Kelley that he can get up in the ceiling and look for leaks. There were enough Councilmen present to okay the design and Mayor Frank Fogleman decided to hold off until the May 28 meeting after Chairman Kelly O’Neal raised questions about the plans.

“Go ahead and look for the leak,” Fogleman said.

“I don’t want to get the cart before the horse. If there were three councilmen here and we were all on the same page, I’d say it would

Quick Response The Marion Fire Department was on the scene Thursday afternoon when a fire broke out at Colton’s Steak House in Angelo’s Grove. The damage was limited but did cause some structural damage. The popular Marion eatery remained closed over the weekend as the damage was assessed and plans to repair and reopen were discussed.

Photo courtesy of Marion Fire Department be okay for Jerry to go ahead. But in the absence of that, I think it is going to take the May Council meeting or we can always have a special Council meeting.”

Marion decided to act as its own contractor to renovate Fire Station No. 2 as well as to build an addition to the police station after cost estimates by engineers came in far above budget.

Kelley presented the Fire Committee with a set of plans that calls for renovating the kitchen, sleeping area, restroom and day room area in the existing structure, and building a non-attached 60 foot wide by 48 foot deep building with two 21 foot bays and 14 foot high doors to store the fire apparatus off to the

Fire Station No. 2 was built around 1991 and has reached the end of its useful life.

Kelley said the renovations and new building will cost about $253,000, and possibly another $50,000 for electrical, plumbing, and heat.

“We’re pretty much leaving the front service area the same,” Kelley said. “We’re going to build another building behind it to the south. It’s an engineered building. It’s not like a farm shop.”

Councilman Kelly O’Neal, who chairs the Police and Fire Committee, asked why the city would want to renovate the existing building over building a new one.

He suggested that the city either tear down the current one or disassemble it and move it to another location and use it for a storage barn.

“We can build a new building for basically the same price,” O’Neal said.

Fogleman said tearing it down or moving it would be too expensive.

“To tear it down, I don’t see that as practical,” Fogleman said. “Woody has trucks he can keep there and we are providing for the bigger ones.”

O’Neal pointed out that the roof leaks on the existing building.

“We’re having issues with the whole north wall,” O’Neal said.

“But that’s fixable,” Fogleman responded. “My personal thoughts are that dismantling costs would just not be worth it.”

Fire Chief Woody Wheeless said there have been some leaks in the past, but as far as he knows, they have been fixed.

“The problem is you have that parapet up top that gets stopped up,” Wheeless said. “You don’t know you have an issue until it starts leaking in to the building. But it’s fixed.”

Kelley said he would take the ceiling down and inspect it for leaks since it is forecasted to rain this week.

“If we get this rain, we will go over there and get the ceiling out and get up close to it,” Kelley said.

O’Neal said he is looking long-term and that it would be better to build new than piecemeal the project.

“If we are going to do this, we need to be all in,” O’Neal said. “We’re basically building a storage shed for our trucks.

Wouldn’t we be better off building new since this had reached its shelf life?”

“It’s no different than what’s already there or what we have at Fire Station No. 1,” Fogleman added.

“It’s not even attached to the main building,” O’Neal continued.

“It’s only a foot or two away,” Fogleman said.

“Maybe eight at the most.” Councilman Cliff Wood said he liked the design.

“This is going to serve the Marion Fire Department into the future,” Wood said.

Kelley said he is ready to get started – whatever they decide. The building will take eight to ten weeks to arrive. City workers will be doing the demolition work.

“I’ve been looking forward to this,” Kelley said.

“And with the rain coming, we can get something done.”

Wheeless said he is also anxious to get started on the project.

“I was ready yesterday,” Wheeless said.