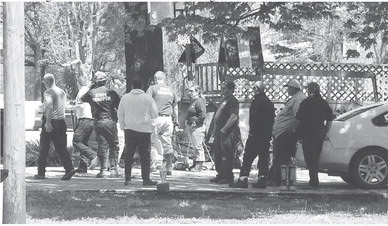 Two adults, one child killed in fatal fire in Earle

Sheriff Mike Allen said a person of interest had been identified the case but his investigators awaited definitive evidence analysis from the state crime lab before acting on an arrest.

I am hoping for an arrest soon. Investigators do have a person of interest on the radar,” said Allen. “I believe they are headed in the right direction. It is just that we are putting all the pieces to the puzzling order and waiting on results from the state crime lab.”

The sheriff said the work to solve a murder was tedious and unlike the crime scene investigation shows on television that solve a crime in an hour long episode.

“”Sometimes you have to wait on medical examiners report to prove that a person died in a homicide or a different kind of death,” said Allen. “People see it on T.V. A crime happens and they about got it wrapped up in an hour.

Our media is instant these days, but the reality is suspects don’t always stay put either. Lab and technology take time. Sometimes can’t lay everything out and show our hand in the early investigation.

No one at the sheriff’s office would comment about whether any of the victims had been shot before the fire was set but rumors in the town persisted enough for some longtime Earle residents recalled another fire in the town that was later ruled a murder and wondered if the two were linked. Sheriff Mike Allen said he had fielded calls about any connection to the 2006 death of Diane Fuller. “We are familiar with that particular case,” said Allen. “They did not treat that case in the beginning as a homicide. Later they found her cause of death was gunshot. They had already released the scene and didn’t process it for the shooting.”

The sheriff said investigators would investigate any possible link once the suspect in the Monday arson was interrogated in custody.

“In this case we will see if there is anything to tie the two together, but we can’t get sidetracked on the old case while we go down the path in this one. We won’t forget the old case,” said Allen.

The sheriff pointed to the fact his department had solved a number of cold murder cases. A mass murderer, held in Texas, recently provided corroborating details in a confession about a Memphis woman’s body he had dumped on the river bank in the county.

“We’ve also solved and made an arrest in an old double murder in Sunset since I’ve been in office,” said Allen. “We do look at old cases. My background is in criminal investigations and there is no cold case homicide that we haven’t tried to look into.”

Allen expressed his hunches were the two fires in Earle would only be related by the mode of operation. The sheriff appreciated the interest from the Earle community was high. “I believe the person that committed that murder back then also committed another murder and is in prison for that,” said Allen. “He had killed people in counties nearby Earle. We have looked into as a cold case but did not develop enough evidence.”

Allen provided final reassurances to the community. “We will investigate to see if our person of interest in the current case could have done that one back then,” said Allen.