Divorces in Arkansas are more likely to be categorized as ʻdisagreeableʼ

Divorces in Arkansas are more likely to be categorized as ʻdisagreeableʼ

Bright Cherry Media Itʼs generally assumed that once any couple has reached the stage where their marriage is to be legally dissolved, things have reached a low point. Recrimination, bitterness, anger and sadness are common when a long-term relationship ends. Happily, however, a divorce doesnʼt always have to be acrimonious — many couples manage to part ways quite amicably; just look at the blissful “conscious uncoupling” of Gwyneth Paltrow and Chris Martin, or observe how Demi Moore and Bruce Willis holiday together with their new partners. Thereʼs even a hot new trend for former husbands and wives to take ʻdivorce selfiesʼ just after leaving court.

Analysis by online divorce form preparation service CompleteCase.com (who provide complete divorce documents) found which states have divorcing couples who are either more amicable, cordial, or, alas, downright disagreeable than each other. This was calculated by comparing couples in each state who declared online that they were in agreement with each other, against those who were not. So which states have the most amicable couples when it comes to parting ways and dividing up their assets?

At the top of the list for amicable divorces is Vermont. Completing divorce papers in the Green Mountain State, as well as other states from Oregon to Rhode Island, can be a pretty painless process as this is where couples are more likely to have an uncontested divorce. Couples in these states might even remain friends afterwards.

Things are likely to be pleasantly cordial in states stretching across the nation from Hawaii to New York; there might be a few conversations through gritted teeth, or a little bit of sniping back and forth, but generally divorcing couples in these states can politely get through it all without too many recriminations.

However, if you live in Arkansas, youʼre not likely to have a quick or easy divorce; relationships which break down here can be the most disagreeable in the country when starting the divorce process. From bitter disputes over who owns what, to raging arguments over alimony, lawyers in The Natural State stand to do rather well.

Once divorce attorneys get involved, things can often get nasty; just think of films like War of the Roses, Kramer versus Kramer or The First Wives Club, with their images of warring couples screaming at each other while the predatory lawyers try to mediate their different needs.

“We like to think weʼre taking some of the pain out of divorce,” says Steven Abramowitz, “Why should something thatʼs already challenging be made even more complicated? Our service makes navigating cumbersome divorce forms easier and much more straightforward for the divorcing couple.” 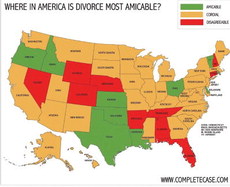