Patriots fall to Lions on the Road 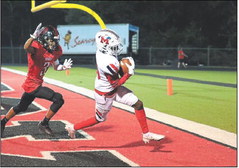 By THE TIMES SPORTS STAFF

In Friday’s 5A East Conference clash, the host Searcy Lions football squad scored a solid 36-14 victory over the Marion Patriots.

It was Homecoming night for the Lions and the Searcy squad sent the crowd home happy. It was a close first quarter, with Searcy holding an 8-7 lead thanks to a two-point conversion. In the second half, Searcy turned on the jets, with three touchdowns, taking a 29-14 lead into the locker room at the half.

The second half was all Lions defense, as Searcy held the Patriots scoreless while adding a touchdown to coast to a decisive 36-14 final score.

In their next game, the Lions clash with the Pine Bluff Zebras (Pine Bluff, AR) in a 6A East match, on Friday, October 16. Searcy will attempt to move on its 4-2 season record. The Zebras enter the match with a 1-3 record after their 34-33 league loss to Jonesboro (Jonesboro, AR).

The Patriots (1-5) will now prepare for their match against El Dorado (El Dorado, AR). The Wildcats enter the 6A East match with a 1-3 record. In their last match, El Dorado ran past Sheridan (Sheridan, AR), 44-13, in a league match.

The Marion Patriots had their hands full last Friday night with a tough Searcy squad. The Patriots will look to get back on the winning track this Friday night against El Dorado.