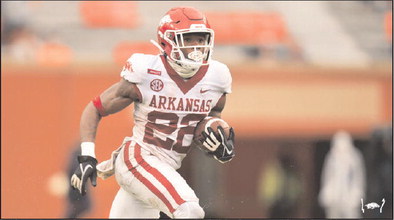 Arkansas launched valiant comeback against No. 13 Auburn on the road

Never leading until receiver De'Vion Warren caught his second of quarterback Feleipe Franks' four touchdown passes for a 28-27 advantage with 5:29 left in the game, then dodging Anders Carlson's missed 34-yard field goal attempt at 2:38, an official's premature whistle on a controversial Auburn intentional grounding penalty voiding a fumble that would have belonged to Arkansas.

It gave Carlson, kicking 25- and 47-yard field goals during Auburn's 20-12 first half, a second game-winning chance.

Though his kick again started veering left, it stayed sufficiently within the uprights for the 39-yard game-winner with seven seconds left.

The controversy stemmed from Auburn quarterback Bo Nix on a 3rd-and-1 from the Arkansas 19 with no timeouts left attempting to spike the ball to stop the clock. However, Nix fumbled the snap, and his spike actually was a backwards fumble that would have been Arkansas' ball but was prematurely blown dead as an incomplete pass and intentional grounding.

Carlson kicked the field goal as Arkansas lost to Auburn and the quick whistle.

'They said it was a fumble, a backwards pass but they blew the whistle before we recovered the ball,' Arkansas coach Sam Pittman on postgame radio said he was told. 'So they couldn't review it, I guess.

That's the explanation I got.'

'These SEC wins, especially this year, are not easy,' Malzahn said. 'You look around the league. (SEC favorites Florida and LSU were upset Saturday by Texas A& M and Missouri). Our guys found a way to win, and we’ll take it.'

'We thought he threw it backwards once he received the ball, and Joe Foucha did a good job of getting on top of it' Catalon, a game-leading 14 tackles, said. 'We thought it was a fumble, but sometimes the game doesn't bounce your way, and that's what it was. So, we got to swallow one. It's a tough one to swallow, but we got to swallow it, get back in the film room, and get ready for Ole Miss next week.'

Arkansas, 1-2 going into next Saturday's game against Ole Miss in Fayetteville, clawed back from a 17-0 deficit during the first half but suffered a game-deciding flaw ensuing even as it accompanied Arkansas' first touchdown.

Following Franks' 4-yard TD pass to Mike Woods at 6:24 of the first quarter to receiver Mike Woods as rain incessantly fell in the first half and would resume after a third-quarter respite, place-kicker A.J. Reed slipped trying to kick the PAT never attempted.

Arkansas tried and failed on 2-point conversions after Franks (22 of 30 for 318 yards and no turnovers versus four TD passes, completed a 7-yard TD pass to Warren with 2:15 left in the first half and a 5yard TD pass to running back Trelon Smith, with 4:14 left in the third quarter.

Reed kicked the then 28-27 go-ahead PAT on Franks' 30-yard touchdown pass to Warren (five catches for 95 yards with a 44-yard long catch on that drive.

'We had to chase points all night,' Pittman said. 'I felt like it was the right thing to do to get us back within three but we missed two 2point conversions and basically that was, you know we and ended the game with (down) two.'

Auburn scored its first touchdown with Barton Lester recovering in the Arkansas end zone the George Caratan punt blocked by Jordyn Peters. Asked about Smith's day on Boyd's behalf, Pittman said, 'We knew he was going to do that. He practices that way. We knew he'd have a good game.

Because just practices his tail off, you know.'

As for Franks, the graduate transfer via the Florida Gators thoroughly a Razorback now helping Arkansas snap a 20game SEC losing streak last week in Starkville, Mississippi, Pittman said, 'He played a heck of a game. He's tough. He did a lot of good scrambling.

He made good decisions and I'm awful glad he's on our football team.'

He just wishes effort Saturday didn't ultimately include the victory that appeared in Arkansas' grasp.

'And I just feel terrible for them that we couldn't pull the win out. I'm very proud of them. We were down 17-0 and we came fighting back and I'm proud of the way our offense started playing there after a slow start.

Our defense did a good job all night.'

Both sides of the Razorbacks' ball played with fill-ins for injured starters.

The Tigers were led by running backs Tank Bigsby (20 carries for 146 yards) and DJ Williams (eight for 71) and Nix, with a 17-yard touchdown among his 30 yards on 10 carries.

Bigsby netted 25 yards on two runs and a Nix pass as Arkansas went three runs and short punt after Carlson's fourthquarter miss at 2:38.

Auburn started its winning drive at 2:06 with no timeouts from the Arkansas 45 extended by the fumble-voiding quick whistle at the Arkansas 19.