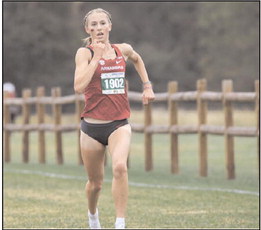 Razorback Cross Country leads the nation, undefeated going back to 2019

arkansasrazorbacks.com Arkansas women moved into the No. 1 position in the latest edition of the Boost Treadmills National Cross Country poll, which ranks programs currently competing during the fall season.

The Razorbacks, who have won both meets they have contested this season, rank ahead of North Carolina State, Notre Dame, Florida State and Mississippi among the top five schools in the top 15 poll.

Arkansas is undefeated in eight consecutive meets, dating back to last year when the Razorbacks claimed its first national championship. The next meet for Arkansas is the Arturo Barrios Invitational hosted by Texas A& M on Saturday, Oct. 17.

Other SEC schools in the women’s top 15 include: 7.

• SEC Freshman of the Week accolade for Taylor Ewert

Razorback Taylor Ewert earned the SEC Freshman of the Week honor in cross country as announced by the conference office on Tuesday. This is the second SEC accolade for Ewert following her second race in an Arkansas singlet.

Placing fourth in the Gans Creek Classic hosted by Missouri, Ewert posted a time of 20 minutes, 15.1 seconds in her first foray over a 6,000m distance in cross country to finish as the top freshman in the field.

Ewert’s time leads the nation among freshmen by 10 seconds over Razorback teammate Corie Smith, who clocked 20:25.1 to place sixth in Missouri.

Ewert, who was a Co-Runner of the Week after winning the SEC Preview meet in September, has produced the leading time by a freshman so far this season in both the 5,000m (16:53.7) and 6,000m.

“They both are very mature beyond their years.

“Taylor is a proven high school superstar and has done some great things.

She’s taken that experience and knowledge to merge right into the collegiate rankings quite comfortably. She is a very confident racer, and an individual that has an incredibly bright future because we’re just touching the tip of the iceberg as far as her talents go.”

“Corie has kind of been in the shadow a little bit, but is very, very close in proximity,” noted Harter. “She has also done some amazing things to step in among the quality of a team that we have. To be a major contributor is a real tribute to her talent and we’re looking forward to even better things down the road.”

Among times by SEC freshmen over the past 12 seasons, Ewert ranks seventh with Smith 11th and both still have a couple more racong opportunities this month.

“What we need to do now as a coaching staff is to find another freshman class that can come in behind them and be reinforcements for a great team in the future.”