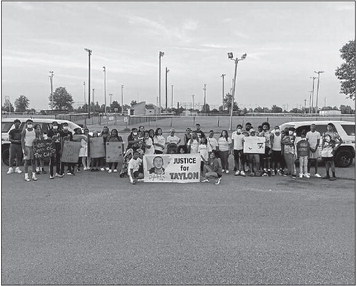 Participants were asked to bring pictures of those lost to violence. Former FIT Director Debra Holmes was scheduled to speak, followed by a balloon release.

Despite the silver anniversary for the national remembrance, this year marked the first for Families in Transition to plan a local event. Jeannetta Gilliam spearheaded the preparations.

“We started advocating for surviving victims of homicide lat October 1,” said Gilliam. “We got a grant for that, so this is the first time we can do it. It will be an annual event.”

Gilliam reached out to support victims after West Junior High student-athlete Taylon Vail was shot and killed inside his grandmother’s home in West Memphis in April 2019. Gilliam focused caring and supporting families adjusting ever since. West Memphis Police logged four murders year to date. FIT has provided a safety net for those stung by the murder of a loved one.

“I am working with three of those four families right now,” said Gilliam.

For over 25 years, Families in Transition has been the only domestic violence shelter in our area. They are often referred to as West Memphis’ best kept secret as a direct result of their ability to ensure the safety of their clients by enforcing strict confidentiality guidelines when it comes to the location.

to men, women and children who are victims of domestic violence, sexual assault, human trafficking, teen dating violence and victims of elderly abuse.

They also provide shelter to homeless individuals for 24 hours until a homeless shelter can be located. While the majority of their

clients are from the West Memphis area, Families in Transition is a member of the Arkansas and National Coalitions Against Domestic Violence resulting in referrals to assist victims from all across the country fleeing abusive situations.

Over the last year, Families in Transition applied for Federal Grant Funding to expand their service area to include a Victim Advocate to work with surviving family members of homicide victims. Providing this resource to grief-stricken families was an issue the Executive Director felt strongly about after hearing about the murder of Taylon Vail; a young man in our community with a bright future whose parent’s were left behind to sort out important details while simultaneously realizing their lives were empty without Taylon. Their hearts were aching.

Families in Transition is proud to announce their program was recently awarded the Federal funding to implement a position that will assist families in accessing crime victims reparations funds, be with the families through all aspects of law enforcement investigations and court hearings, assist with preparing victim impact statements to be read at sentencing, counseling resources or just lend a listening ear.

On Sunday September 6, 2020 Heart Beat of the City organized a Justice for Taylon Walk. We started at the Lehr Arena and walked to Tilden Rogers Park. “We had a special guest, Bully the Bull Foundation, from Memphis, Tennessee, and the West Memphis Police Department escorted. There were about 100 participants with mostly being young children and teens,” said Tabatha Vail, mother of Taylon Vail, who started Heart Beat of the City following her son’s death to provide educational programs and services to the youth and young teens in and around the Crittenden County area. To learn more about Heart Beat of the City visit www.heartbeatofthecitywm.org.