Memphis halts all football activities after rash of COVID-19 cases 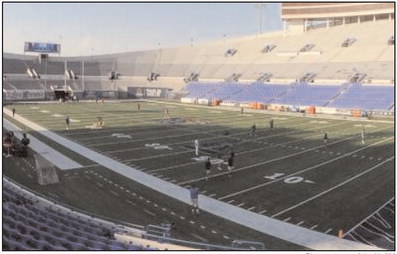 Due to these circumstances, the football team has paused all practice and group activities and will unfortunately not be able to participate in today's Unity Walk hosted by the University of Memphis.

There are no serious cases at this time, but all studentathletes and staff affected are being closely monitored. The positive tests and subsequent contact tracing indicate that the majority of cases have been primarily linked to social events outside of official football activities.

Citing a source, the Memphis Commercial Appeal reported that 'at least 20 people within the program who have tested positive for COVID-19 and are currently in a 10-day isolation period' while 'at least another 20' are in quarantine because of contract tracing. Unconfirmed reports said the spike in cases was reportedly attributed to a party bus carrying members of the team following the win over Arkansas State. At least one player, Memphis defensive lineman O'Bryan Goodson Jr., has disputed that account, though.

Fortunately, while Memphis has indicated that none of the cases are serious, positive cases are one thing and should be treated seriously regardless of who contracts the virus, but contact tracing protocols are what can decimate a depth chart.

Already, several games have been rescheduled or postponed indefinitely due to either an outbreak or preparation times affected by an outbreak. The season isn't even two weeks old yet. Disruptions have been, and will continue to be, a part of the 2020 season -for however long that season will be. More details, including the status of the game against the University of Houston scheduled for Friday, Sept.

18, were provided the week after consulting with the AAC COVID-19 Medical Advisory Group.

On Monday, the American Athletic Conference announced that the scheduled football game between Houston and Memphis has been postponed, due to positive COVID-19 cases at Memphis and the ensuing quarantine of studentathletes.

The game had been scheduled for Friday, Sept. 18.

The conference will reschedule the game on a date to be determined.

Memphis Athletics Director Laird Veatch said, “I am disappointed that we will be unable to play the Houston game at this time, but a season without a pause or change was always going to be unlikely. We will continue to closely monitor all of those impacted and do what is best for the safety and health of our student-athletes, coaches, and staff.”

The American Athletic Conference (The American), a member of the NCAA, was reconstituted in 2013. With the conference office in Irving, Texas, The American is comprised of the following institutions: UCF, Cincinnati, East Carolina, Houston, Memphis, Navy (in football only), USF, SMU, Temple, Tulane Tulsa and Wichita State (basketball and Olympic sports). Under the leadership of Commissioner Mike Aresco, The American sponsors 22 championships – 10 for men and 12 for women; is a member of the College Football Playoff; has television partnerships with ESPN and CBS Sports; in the spring of 2019, signed a landmark television agreement with ESPN that commences in 2020-21; and has a marketing partnership with Learfield. The cancellation of several major football programs this season has put the AAC in the spotlight, including the University of Memphis landing at No. 18 in the first college football poll of the season. For more information, please visit www.TheAmerican.org.

Photo courtesy of the U of M