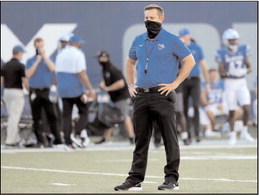 Memphis comes back at home to beat Arkansas State 37- 24

Saturday night at Liberty Bowl Memorial Stadium, the Tigers overcame a sluggish start to overpower Arkansas State, 37-24, before a crowd limited in size by health department regulations brought on by the cornonavirus pandemic. Down 7-0 and 14-7 in the first quarter, the Tigers recovered to score twice in the second quarter – including a 9-yard touchdown pass from Brady White to Calvin Austin III in the closing seconds of the half – and pulled away with a huge third quarter.

Silverfield was on the sidelines for his second game as Tigers' coach, the first coming in late-December's Goodyear Cotton Bowl Classic against Penn State shortly after taking over for Mike Norvell. Norvell left in early December to become the Florida State coach.

Silverfield gained his first victory as Tigers coach by leading his team to a strong second-half showing.

Memphis (1-0) outscored the Red Wolves, 13-3, in the third quarter, a surge created by a defense that forced two turnovers, one that led to a 7-yard TD pass from White to tight end Sean Dykes for a 34-17 lead.

White, the fifth-year senior, passed for 275 yards and four touchdowns and running back Rodrigues Clark, getting the majority of the carries with the recent departure of Kenneth Gainwell, added 105 yards on 20 attempts. Gainwell, the American Athletic Conference Rookie of the Year, opted out of the season late last month. Dykes had a career night with 10 catches for 137 yards and two TDs.

'I thought it was solid,' White said. 'I was very happy with the win. But we definitely left some plays out there. But at the end of the day, we did what we had to do to be 1-0.'

Arkansas State (0-1) and the Tigers were playing for the first time since 2013 and the Red Wolves, who have appeared in six straight bowl games, opened the game by scoring on an impressive 12play, 75-yard drive.

Memphis answered with a 12-play drive of its own, with White finding Dykes for the first of his two TD receptions, this one from 12 yards out.

And then the Tigers came out in the second half and outplayed the Red Wolves.

'The first quarter I would have liked to have flushed down the toilet,' Silverfield said. 'But then our guys did respond. I'm really proud of our execution from the second quarter on. We found a way to get it done.'

The Tigers will remain at home for their next game, opening AAC play Sept. 18 against Houston. Kickoff is set for 6:30 p.m. and the game will be shown on ESPN.

• The Tigers won their 19th consecutive non-conference game at home, a streak that dates to 2013.

• Tigers TE Sean Dykes made his return from injury in impressive fashion.

Dykes appeared in only four games in 2019 before suffering a season-ending injury. Against ASU, he turned in the first 10-catch game of his career and his second 100-yard receiving game. His two TD receptions were a personal best.

• At one point late in the second half, the Red Wolves had amassed 103 total yards in the third and fourth quarters .

• Defensive lineman Joseph Dorceus converted a fake punt late in the third quarter by taking the snap and picking up the first down.