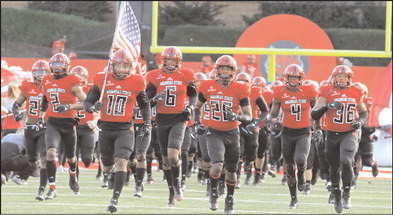 15 game against Georgia State at Centennial Bank Stadium will now air on ESPN with kickoff at 6:30 p.m. A-State’s contest at Appalachian State moves up to Thursday, Oct. 22, with a 6:30 p.m. (CT) kickoff on ESPN. A-State’s home opener versus Central Arkansas on Sept. 19 will kickoff at 6:00 p.m. on ESPN+. The league office also announced that the Red Wolves will face the Ragin’ Cajuns on Saturday, Nov. 7, rather than the previously scheduled date of Thursday, Nov. 5. While the Red Wolves game against the Ragin’ Cajuns was previously set to appear on ESPNU, the television designation for the new game date will now be determined at a later date.

Five-time Sun Belt champions, the Red Wolves have appeared in nine consecutive bowl games for the 14th longest active streak in the nation. A-State has piled up 75 victories over the last nine years to tie for the 24th most in the country over that span.

A-State is set to begin its seventh season under head coach Blake Anderson, who received the 2019 Capital One Orange Bowl-FWAA Courage Award.

Anderson will enter the year with 47 victories, which are just five shy of tying the second most in school history among all head coach-es. The Red Wolves also claimed Sun Belt titles in 2015 and 2016 under Anderson, who has guided the program to 36 Sun Belt wins for the second most ever by any of the conference's all-time head coaches.

A-State is currently slated for four national televised games, beginning with the season opener Saturday at Memphis on ESPN.

Kickoff is at 7 p.m. from Liberty Bowl Memorial Stadium.