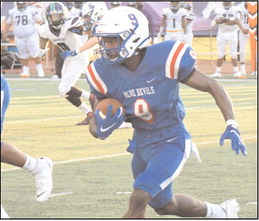 WM School District With athletes all over the world quarantined for three months, it should have made for a bunch of athletes out of shape when it came time to fire those muscles again.

And for the most part that has held true.

Except it didn't last Friday night at Hamilton-Shultz Field.

The West Memphis Blue Devil football players were shutdown due to COVID19, but they apparently made up a lot of ground from mid-June on because they were clearly the better conditioned team in defeating Southwest Little Rock 36-16 in the season opener. They'll need a similar effort, if not a better one, on Friday night at Hamilton-Shultz Field as the Blue Devils take on Wynne.

The decision to move Senior Night to early in the season was made due to uncertainty for the rest of the football season. Thus, West Memphis' seniors will be honored before the game, starting at 6:30 p.m.

New head coach Robert Hooks noted early on this summer that his kids were already in better shape than he anticipated thanks to the conditioning program of Billy Elmore's staff.

Hooks then pushed his players hard once the state gave football players permission to start workouts on June 18.

On a night that pushed the cardiovascular envelope, the Blue Devils won out.

After intermittent rain throughout the afternoon and ending just five minutes before kickoff, the air was heavy for the players on the field.

'One thing I learned working with Buck James at Camden Fairview and Bryant is that early in the season if you can be in better shape than your opponent it gives you a good chance to win,' said Hooks. 'Early, you've got to train them like thoroughbreds. You push them to the max and then back off of them about the third week to let them get their legs back under them.

Actually, right now we don't have all our legs under us. You're going to see us look like a different football team in about week 4.

'We ran every day in the summer. A lot of programs stayed away from the weight room and just tried to implement their offenses and defenses and sort of slacked off a little on the conditioning. We did not compromise the weight room nor in the running.

That's what's going to help us these next few weeks.'

The Blue Devils actually looked stronger in the second half, outscoring Southwest Little Rock 30-0. One of the reasons was the play of junior Tamerius Bell, who rushed 7 times for 93 yards and two touchdowns, both coming in the decisive fourth quarter, as well as two key interceptions.

Hooks said Bell wasn't even on the depth chart at running back in the days leading up to the game. He was only listed as a starter in the defensive secondary.

'Before Wednesday Tamerius wasn't a running back,' Hooks said. 'On Wednesday we had him working some H-back. One of our running backs was not hitting the hole and I could hear Tamerius in the background saying he wanted to hit the hole. So I asked him if he could do any better and he said yes.

So I put him in there…and he hit the hole. I said do it again, and he did it again. I made up my mind there that we were going to get him the football.'

Wynne also got its season off on the right foot last week, defeating Marion 35-19. Head coach Van Paschal's team will bring a tough option offense to town that has caught Hooks' attention.

'They have a slotback (Carl Washington), he's only 5-foot-5 and 140 pounds but when he gets into the open spaces, I don't know if we've got anybody who can catch him,' said Hooks. 'I don't think you can rattle them.

They're going to come in here and do what they do best and be pretty good at it.'

CASA of the Arkansas Delta gives a voice to the voiceless

October is just a couple of days away, and in conjunction with the annual Breast Cancer...

The federal Equal Employment Opportunity Commission just filed a lawsuit against Kroger because...

“Now the works of the flesh are evident: sexual immorality, impurity, sensuality, idolatry,...

1789 - A regular army was established by the U.S. War Department with several hundred men. ...

Cancer is something that will almost surely affect you or someone important in your life. It’s...