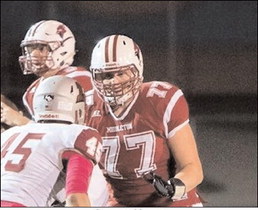 Red Wolves OL one to watch in upcoming football season

Horst is now the second AState player tabbed to the Outland Trophy Watch List over the last three seasons, while also becoming the fifth all-time to earn a spot on the prestigious list. He joins former standouts Lanard Bonner (2018), Ryan Carrethers (2013), Matt Mandich (2008) and Garry Johnson (2002).

Horst helped lead the way for over 300 yards total offense by A-State in all but one game and over 400 yards in 10 outings during 2019, including a seasonhigh 558 yards against Troy. With Horst and the offensive line providing protection, the Red Wolves’ passing yards per game (312.1) was the second highest average in the Sun Belt and ranked 10th in the nation.

Despite ranking ninth in the Sun Belt in time of possession, A-State ranked fourth in the league in scoring offense and fifth in total offense behind Horst and the offensive line. He helped secure the time needed for the Red Wolves’ quarterbacks to throw 37 touchdown passes that were the most in the conference and tied for eighth in the country. Horst also helped paved the way for running back Marcel Murray to be named All-Sun Belt Conference.

The 75th Outland Trophy winner is chosen from three finalists who are part of the annual FWAAAll-America Team, and the recipient will be announced in early December. The official presentation to the winner will be made in Omaha, Neb., at the Outland Trophy Awards Dinner scheduled for Jan.

The Outland Trophy is a member of the National College Football Awards Association (NCFAA), which encompasses the most prestigious awards in college football. Founded in 1997, the NCFAA and its 25 awards now boast over 800 recipients, dating to 1935.

Season tickets for A-State’s 2020 campaign are currently on sale through the AState Ticket Office, located at First National Bank Arena’s lower red entrance. They are available by calling 870-972-2781 or going online to AStateRedWolves.com.