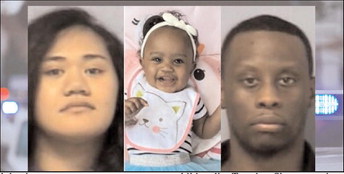 ralphhardin@gmail.com An infant who was reportedly abducted by her biological parents during a supervised visit last week has been found safe and her parents are facing charges.

Last Tuesday afternoon shortly before 5 p.m., the West Memphis Police Department reported that 6-monthold Majesty McClanton had been found along Interstate 40 in Johnson County, less than six hours after her abduction The department’s Twitter account said her parents, Rodney McClanton, 27, and Miracle Auimatagi, 21, had been arrested on charges of interfering with court-ordered custody.

An Amber Alert was issued for the child earlier Tuesday. She went missing in West Memphis around 11:45 a.m. Authorities said McLanton and Auimatagi were meeting the child under the supervision of the state Department of Human Services when they took her and fled.