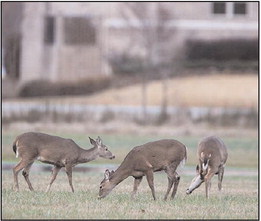 This fall, special archeryonly hunts will be allowed within Helena-West Helena city limits to remove excess deer and prevent nuisance issues the animals can cause.

Ralph Meeker, deer program coordinator for the AGFC, says that although the deer population once was estimated at roughly 500 animals statewide, Arkansas now boasts enough deer to maintain annual harvests measured in hundreds of thousands.

In places, wildlife recovery has exceeded what people will tolerate.

“Wildlife populations in these urban environments often exceed what we call ‘social carrying capacity,’” Meeker said. “That’s the density of a wildlife population where they begin to become a nuisance or danger. A few areas in Arkansas have reached this threshold, so the AGFC works with those cities and towns to find solutions.”

Urban bowhunting has been a growing option for communities to reduce abundant deer populations for the last two decades.

Hunters are looking for additional opportunities, archery equipment is very limited in distance and is very unintrusive.

“Bowhunting has proven effective and very few conflicts between user groups have developed during urban bowhunts held in the last decade,” Meeker said.

“The hunts also contribute to feeding needy families in communities where they are held.”

As a stipulation of urban hunts, participants donate their first deer to Arkansas Hunters Feeding the Hungry, which provides venison to food banks and nutrition programs throughout Arkansas. There are a few extra rules for hunters to follow during urban bowhunts. According to Carrie Crawford, a member of the AGFC’s staff who also is involved in the planning, promotion and coordination of urban bowhunts for the Arkansas Bowhunters Association, participants must register through the ABA for the hunt they wish to participate, must have passed a bowhunters education course and must attend an orientation where they must pass a shooting proficiency test with the archery equipment they plan to use during the hunt.

“Safety is a priority during these hunts,” Crawford said. “And we also want to make sure all participants project a positive image to residents who may live nearby. Hunting is the most humane, safe and efficient means of dealing with these situations and we want to eliminate any conflicts we can to ensure this tool is still available for wildlife managers and hunters.”

The ABA will hold a special one-day workshop at the Old Armory in West Helena to hold a bowhunter education course and field day as well as orientation and proficiency test beginning 8 a.m., July 11.

“We will have the bowhunter education class beginning at 8 a.m., and participants who need to complete that requirement

will need to register at www.register-ed.com by 7:45 a.m. to attend,” Crawford said. If participants already have their International Bowhunter Education Program card or have taken the online course before that day, they can come around 2 p.m. to attend orientation and complete their field day requirements.”

The Old Armory is at 124 Phillips Road in West Helena. To register for the hunt or learn about other urban bowhunting opportunities in Arkansas, visit http://www.arkansasbowhunters.