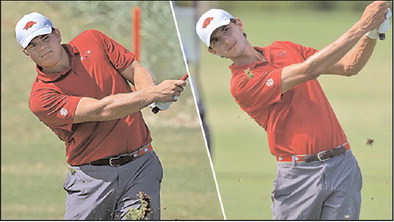 To be eligible for the Division I Srixon/Cleveland Golf All-America Scholar status an individual must be a sophomore, junior or senior with a stroke-average under 76.0 while maintaining a minimum cumulative career grade-point average of 3.2 and participating in 40% of the team’s competitive rounds.

Garza carries a 3.36 career GPA, is set to graduate later this summer and is a four-time SEC Academic Honor Roll selection. He posted a 73.58 scoring average and 14 of his 18 round counted toward the team total. Garza shot a season-low round of 67 twice – once leading to a 21st-place finish at the Bearcat Invitational and the other to a 25th-place finish at the White Sands Intercollegiate.

Overstreet graduated from the University of Arkansas with a degree in business finance, posting a 3.89 GPA with a season stroke average of 71.46. The Kingfisher, Okla., native is a two-time SEC Men’s Golf Scholar-Athlete of the Year and was Arkansas’ nominee for the SEC’s H.

More honors came earlier this week for Overstreet, who was voted 2020 Academic All-America Division I Men’s At-Large third team, as selected by the College Sports Information Directors of America (CoSIDA). The honor recognizes the nation’s top student-athletes for their combined performances in athletic competition and in the classroom.

The At-Large team may be the most exclusive in the CoSIDA realm as it features student-athletes from 12 sports including fencing, golf, gymnastics, ice hockey, lacrosse, rifle, skiing, swimming, tennis, volleyball, water polo and wrestling. Only seven NCAA Division I golfers were named Academic All-America.

Overstreet joins Austin Cook as the only Razorback men’s golfers to be voted to the CoSIDA All-America team.

• Graduated from the University of Arkansas with a degree in business finance, posting a 3.89 GPA.

• His 459 career birdies rank third and his 13 eagles tie for first.