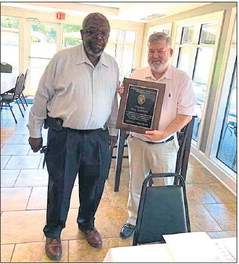 The department recognized his 28 years of service and sent him with a found farewell as he retired last week.

“Captain Mitchell will truly be missed by WMPD and the City of West Memphis,” said Assistant Chief Robert Langston. “A department will always suffer when it loses someone that had twenty-eight years of law enforcement experience. Captain Mitchell was a tenacious investigator, and he had a strong desire to protect the citizens that he served. Ken will be impossible to replace, but we hope he enjoys a well-earned retirement.”

After working in the city jail for a little more than a year, Mitchell took on the responsibilities of being a patrol officer on April 1, 1992, by November he earned the rank of Patrol Sergeant. He next earned promotion to detective four years later. Mitchell earned two more promotions, Lieutenant in March of 2004, and Captain at Christmastime in 2009. Captain Ken Mitchell served the majority of his career in the Criminal Investigation Division. Some of his other assignments included: Internal Affairs, Public Information Officer, and he finished his career as an Administrative Captain, where he handled pre-employment testing and background checks, purchasing, grant management, and building and fleet maintenance.

”I remember seeing him when he started wearing those the baby blues (jailer uniform),” said Allen. “Then he came to work upstairs as a detective when we were still at the district court building. He was a good investigator, the kind that would make you proud. He put his heart into every case. I remember a lot of homicides where we really didn’t have enough to charge somebody and he would go ask the suspect if he did it and get a confession from the guy. Wow, 29 years in one department is really something.”

”He is absolutely the best investigator I ever worked with,” said Oakes. He is super smart. He is meticulous and took care of every details. He never felt pressured by artificial deadlines or

“He was always the first one to work,” said Oakes. “I’d come in at 5:30 and he was already there getting his daily work done. We would go through the cases early and pick cases to ask then Lt. Allen for the most important cases. Cases where if we worked hard, they’d be solvable. Cases you became a detective for. Cases to help people solve the really bad stuff in their lives. He never left anything unfinished and took care off all the details. He made me look good many, many times. It was him not me.”

Oakes himself retired last summer. He shared some insight about retirement.

“Retirement, he earned it; he earned it,” said Oakes. “He needs to buy a house in the country and go fishing every day. It’s hard at first when you are used to being so busy everyday to get up and sit with your dog on the porch and drink coffee.”

”He seems too young to retire,” said Allen. “I don’t know what he is going to do after he gets through the honey-do list at home, but I wish him all the best.”