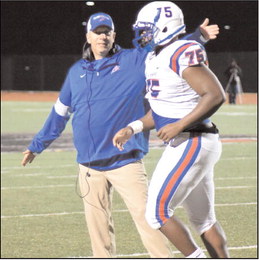 WM School District Billy Elmore came to West Memphis in 2014 charged with rebuilding a storied football program that had a brief stumble.

Six years later he says he wants a new challenge in his career.

Elmore resigned last week as Blue Devil head football coach and has been hired as the West Memphis athletic director. His new role will be a dual one. Elmore will also be head of transportation for the West Memphis School District.

'I've been an athletic director before in my career and I think in this position in West Memphis I can be even more beneficial to our kids from an athletic director's standpoint than being the head football coach,' said Elmore. 'Even though I won't be on the front lines of competition, I still have a chance to influence a lot of things they do.'

The WMSD will move quickly to announce Elmore's successor, what with football season less than three months away.

After Lanny Dauksch resigned as Blue Devil head coach in 2014, Elmore, who had won his second state championship at Stuttgart in 2012, was named his successor.

After 12 wildly successful years under Dauksch, the Blue Devils stumbled to 3-7 in 2013. Elmore was brought in with a new system, the spread offense, and it took two years for it to catch on.

But once it did, it took off.

'I think I've coached my last game,' Elmore commented. 'But I'm not leaving West Memphis. Every desire and intention I have is to retire here. That time of coaching, I think, has come and gone.'

The Blue Devils defeated Forrest City 42-41 on the final play of the game as Kylin Whiting connected with Darrell Dudley for a 21-yard touchdown pass.

'I loved my time here as coach,' said Elmore. 'The program had slipped a little bit, but I feel like we've been knocking on the door the last three years. Yes, that first game against Forrest City was wild. I can't remember many games I've coached where our team won on the last play of the game.'

Elmore's emergence on the West Memphis scene was also dramatic.

The Blue Devils had run the wing-T offense for over 20 years from Grafton Moore to Lanny Dauksch.

It was a part of the West Memphis DNA.

Along comes Elmore, who wants to run the spread and throw the ball around twice as much as either of his predecessors. It was almost like teaching players a new game.

'It was a big adjustment for the kids, I know that,' said Elmore. 'My style and Coach Dauksch's style were complete opposites.

Lanny was as successful with his way as anybody in this business has ever been. That first group I had struggled with the new offense. But eventually the kids adapted to what we wanted to do on offense.'

Among the other top moments, according to Elmore, was the winning two-point conversion over Marion in 2019 in which offensive tackle Chris Morris took a lateral pass from Owens McConnell to beat the Patriots.

'Another moment that was big for me was National Signing Day,' said Elmore. 'I love the first Wednesday in February. A football game is one thing, winning and losing is another, but when a kid gets an opportunity to get their college education paid for…that's life-changing stuff.'