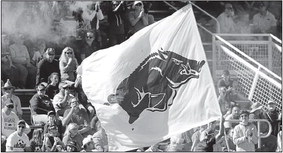 The Southeastern Conference announced Friday that all athletics activities, including competitions, team and individual practices, meetings and other organized gatherings, will be suspended through at least April 15, due to continuing developments related to the coronavirus (COVID-19).

The SEC had previously announced that all competition was suspended until March 30. That suspension of competition has been extended through April 15 and now includes all organized team activities.

SEC member institutions will continue to provide their student- athletes with care and support to meet needs in areas including academics, medical care, mental health and wellness, nutrition and housing as needed.

Prior to the shutdown, one Diamond Hog earned kudos for his performance.

Arkansas baseball’s Robert Moore was named SEC Co-Freshman of the Week after a pair of strong performances against Grand Canyon.

It is the second weekly honor for the freshman in_elder and fourth by a Razorback this season. Heston Kjerstad (Co-Player) and Connor Noland (Pitcher) have also received awards from the conference of_ce in 2020. On Feb. 24, Moore picked up SEC Co-Player of the Week for his showing against Gonzaga, as well as Perfect Game National Player of the Week.

From Leawood, Kansas, Moore went 5-for-9 at the plate vs. the Antelopes, with three RBIs and run scored and a _nal batting average of .556. His _ve hits were tied for the team-lead last week, as he recorded multi-hit performances in both games against GCU.

In the _rst contest, Moore racked up three hits and an RBI on March 10, driving in a run in the second inning, then scoring in the _fth. In game two, Moore had two more hits, including a leadoff single in the third inning and a two-RBI knock in the sixth.

This season, Moore has put together a .317 clip at the plate, starting all 16 games, with 20 hits, two doubles, two homers, 17 RBIs and 10 runs scored. He leads the team with seven multi-RBI performances and has six multi-hit games.

The Hog faithful will have to wait to cheer for their team. The Southeastern Conference joined with other organizations last week in suspending all sports over concerns about the COVID-19 pandemic.

Photos courtesy of the Arkansas Razorbacks

Arkansas Razorback Robert Moore was named SEC Co-Freshman of the Week for his performance in the Diamond Hogs’ clashes with Grand Canyon.