A look back at the Greyhounds’ season 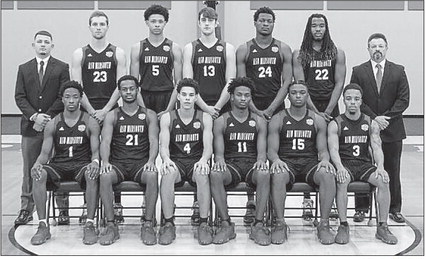 The ASU Mid-South Greyhounds put a cap on their season earlier this month, _nishing at #17 in the National Junior College Athletics Association’s national rankings. The team came just two points shy of joining the “Sweet Sixteen” in the NJCAA National Championship Tournament.

In the deciding game, with the district championship on the line, the Greyhounds battled their way back from a 13-point halftime de_cit to tie the score with under a minute remaining, but an offensive rebound ended up being the deciding factor in a 74-72 loss to #6 North Central Missouri in the NJCAA Central Plains District Championship Game on March 7, at The Dog House.

The loss ended the season for ASU Mid-South (25-8) while the North Central Missouri Pirates (27-3) advance to the NJCAA National Tournament as one of 16 teams vying for a National Championship. This is the second season in a row for the Pirates to defeat the Greyhounds in the District Championship as they toppled ASU Mid-South 73-67 last year in Trenton, Missouri.

The Greyhounds led 6-4 early in the game before they were blitzed by a physical Pirates team who used a 12-0 run to take a 16-6 lead they would eventually stretch to 42-29 at halftime. Marty Jackson, the Pirates’ 6’7” post and Region 16 MVP torched the Greyhounds for 16 of his team-high 23 points in the half.

But ASU Mid-South would not go down without a battle. North Central kept a three- to four-possession lead as Jackson’s free throw put the Pirates up 70-58 with 6:10 left in the game before the Greyhounds began their comeback with two transition layups by Jalen Lynn and Kevin Fulton as the Pirates went inside to Jackson who failed to convert and then couldn’t get a shot to go at the shot clock buzzer and the Greyhounds got the ball on a team rebound that went off the Pirates out of bounds.

The Greyhonds then missed two shots but got the ball back when the Pirates committed 1 of 23 turnovers on the rebound, and Ike Moore found Jalen Lynn underneath for a layup on the inbounds play to cut the North Central Missouri lead to 70-64. The Pirates missed a three-pointer on the other end and Jackson pulled in the rebound, but Garret Finley blocked the shot and collected the rebound to give the Greyhounds the ball.

Lynn was then fouled on his way to the basket and knocked down both free throws to cut the lead to four points. The Greyhounds fouled on the next possession to put Damien Loyd on the line, but he missed the front end of a 1-and-1. However, the ball took a Pirate bounce on the rim and Atavian Butler found his way between two Greyhounds to collect the rebound and put the ball in, giving the Pirates a 72-66 lead.

But Jalen Lynn would drive the paint on the ensuing possession and hit to cut the lead back to four points, and J.T. Smith would rebound and be fouled on the North Central Missouri miss and hit one of two free throws to make it a one-possession game, 72-69.

The Pirates again tried to go inside to Jackson, but the Greyhound double- team resulted in a Jalen Lynn steal and he was fouled in transition racing to the basket. Lynn hit one of two free throws to make it a 72-70 game and the Pirates missed a 17foot jumper that was rebounded by Kevin Fulton to give the Greyhounds the ball with under two minutes remaining.

Jalen Lynn’s driving scoop shot tied the score at 72-72 and the Greyhound defense was looking for its seventh stop in eight possessions, but Loyd’s eight-foot jumper came off the rim right to Butler who jumped and put it in with one motion to give the Pirates a 74-72 lead.

The Greyhounds then had a chance to tie or take the lead, but the Pirates forced 1 of 14 Greyhound turnovers to get the ball back with 43 seconds left in regulation. ASU Mid-South chose to play defense to get the stop rather than foul, and the decision paid off as North Central Missouri was only able to get off a Loyd 24-foot shot that did not draw rim as the shot clock expired giving the Greyhounds the ball back with 8 seconds left and a chance to tie or win the game.

The Greyhounds got off three shots that could have tied the game, but Jalen Lynn’s acrobatic layup attempt was off the mark, and Jarius Sharp’s attempt off an offensive rebound rolled 360-degrees around the rim before falling out and the ball was tipped out of bounds with .5 seconds remaining. The Greyhounds’ inbounds play produced a shot by Ike Moore, but the ball bounced off the rim and the Pirates held on for the victory.

The Greyhounds shot 42.2 percent from the _eld while North Central Missouri shot 44.4 percent, but the Pirates converted 6-of-15 three-pointers (40.0 percent) while the Greyhounds only hit 4-of-18 (22.2 percent). ASU Mid-South was also outrebounded 42-31 thanks to 19 Pirate offensive rebounds.

Jalen Lynn led ASU Mid-South with 23 points while Ike Moore _nished with 20 points and a gamehigh 6 assists. Garret Finley and Jarius Sharp both _nished with 7 points and combined for 15 rebounds.

Their _nal 25-8 record is the second- best single-season record in school history, and the sophomore class went 47-17 in their two seasons, winning back-to-back Region 2 Championships to continue the trend to four consecutive titles. The Greyhounds are an outstanding 96-33 (.744) over the last four years for an average of 24 wins per season in that span.

There were several highlights to the Greyhounds’ season. The team started the season with a pair of big wins in against North Lake College (80-66) and Parkland College (67-56) in the Greyhound Tipoff Classic.

The Greyhounds racked up some scoring records later in December, pouring on 139 points on Dec. 4 in a rout of the Crowley’s Ridge College JV, winning 139-47.

Only once did the Greyhounds drop back-to-back games, a pair of consecutive road losses to Itawamba Community College (73-61). The Greyhounds responded to the defeats by going on a nine-game winning streak. From Jan. 18 to Feb. 8, ASU Mid-South rattled off wins against every opponent they faced, hitting triple-digits in three of those wins. In all, the Greyhounds topped the 100-point mark _ve times this season.

After winning the _nal three games of the regular season in a big homestand, the Greyhounds headed to Harding University in Searcy for the NJCAA Region 2 Tournament, where ASU Mid-South dominated National Park College 92-78 before thumping North Arkansas College 104-83 to set up the showdown with North Central Missouri College in the NJCAA Central Plains District Championship.