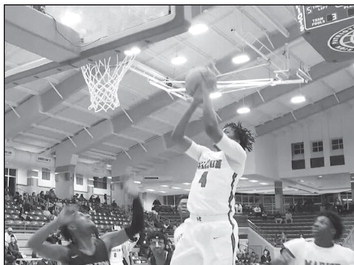 By Tyler Bennett Marion School District Playoff implications were on the line once again on Tuesday night for the Patriot basketball teams. Marion’s boys improved their position in the standings, but the girls had another tough night against the dangerous Lady Raiders (21-3 overall, 8-1 5A East).

The Lady Patriots (1014, 3-6) came into the night two games out of the playoff picture behind the fourth seeded Jonesboro Lady Hurricane. While not out of the tournament yet, a loss would greatly hurt their chances, especially with only five games left in the regular season after Tuesday night.

The Lady Raiders clogged the paint with defenders, forcing the Lady Pats to shoot outside shots for the majority of the game. Marion hit some three-pointers early in the game, but not enough to keep up with the abundance of scoring threats on the Nettleton roster.

Nettleton senior and Razorback commit Elauna Eaton finished with twenty-two points, but the real deciding factor may have been the play of sophomore guard Briley Pena.

Pena finished with nineteen points, sixteen of which came in the first half. Her performance in the first two quarters drew enough attention in the second half that her teammates became open more often, which led to easy assists for the sophomore.

The 77-60 loss paired with a Jonesboro win over Paragould dropped the Lady Pats to three games out of the playoffs. Their next game will be at home against the Searcy Lady Lions (5-16, 0-9), a team they defeated 61-24 in their first meeting.

Marion’s boys (10-12, 6-3) came into the night with the same conference record as the Searcy Lions (10-11, 5-4), but were behind them in the standings because of Searcy’s victory over the Pats. The Nettleton Raiders (5-15, 2-7) have played in a lot of close games this season, but came into the game with only two conference wins.

The Raiders were led by senior Demarion Daniels, who scored a career-high twenty-five points, including four makes from beyond the arc. The Raiders made eight three-pointers total in the game, three of which came from senior Taybin McCullough, who finished with thirteen points. The long-ball kept the Raiders in the game and pushed momentum on their side in key moments, but the stall game of the Patriots has become a difficult puzzle to solve. Marion bled the clock out while maintaining the lead in the second half and got away with it thanks to textbook passing and shot selection.

Senior Makyi Boyce was one of the main beneficiaries of this game plan, scoring twelve points in the second half. Boyce led the team with twenty points total, followed by senior Detrick Reeves with eighteen points and junior Darrius Waterford with seven.

The 63-58 win, paired with a Searcy loss, elevated the Pats to the three seed in the 5A East. Marion’s game with the Lions on Friday is not only a chance to further solidify their playoff hopes, but is also a revenge game after the Patriots’ 71-65 loss at Searcy.