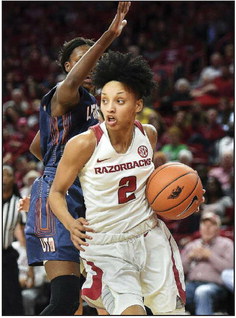 Lady Razorbacks set record for points against an SEC opponent From the Arkansas Razorbacks www.arkansasrazorbacks. com FAYETTEVILLE — No. 25 Arkansas (19-5, 7-4) put on a historic offense display in beating No. 15 Kentucky (18-5, 7-4), 103-85, marking the most points ever scored by the Hogs against an SEC foe.

Senior guard Alexis Tolefree continued her dominant final collegiate campaign, as she went for a team-high 30 against Kentucky. It was her second-career 30-point performance, and the second in her last three games. Redshirt junior guard Chelsea Dungee also had a big game for the Hogs, going for 24 points on an efficient eight for 12 clip, including a perfect four of four from beyond the arc. The game was tightly contested in the first half, as the Hogs took a 38-35 lead into the intermission. However, the Razorbacks used a huge third quarter, one in which they outscored the Wildcats 33-19, to break this game wide open.

Arkansas opened the period with an 11-3 run, getting contributions from Tolefree (5), Dungee (4) and Amber Ramirez (2). After the ‘Cats cut it back to six, Arkansas would close the period as strong as it opened it, finishing the frame on a 14-2 run. The Hogs would take a 71-54 lead into the third, and would never look back.

• The Hogs scored 100+ for the third time this season, and for the second time in SEC play. Their 103 points were the most since they scored 106 against Sam Houston State back in 2009.

• Arkansas was somehow even better from three, scorching the nets at a .667 percent (14-21) clip, the best percentage in program history when attempting more than 15 threes.

• With her 30 points, Tolefree joined Chelsea Dungee as the only Hog with multiple 30+ point games so far this season.

• Tolefree continues to be a monster on the glass for Arkansas, as she registered her fourth game this season with 7+ rebounds.

• Ramirez matched her season-high in assists, dishing five of them against the ‘Cats.

Next time out, the Razorbacks are off this Thursday before heading to Oxford, Mississippi this Sunday, where they will take on Ole Miss. That game will tip at 2 p.m., and will air on the SEC Network.

For more information about Arkansas Women’s Basketball, follow us on Twitter and Instagram at @Razorback-WBB and on Facebook at Facebook.com/RazorbackWBB. Be sure to subscribe to our You-Tube Channel, “Kickin’ It In The Neighborhood” for an inside look at the Razorback women’s basketball program and check out The Neighborhood podcasts at CoachNeighbors.com.