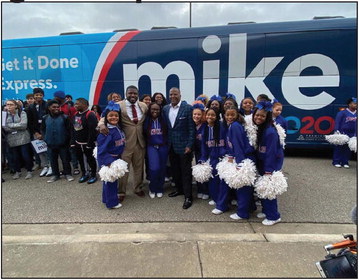 It’s election season again. If you’ve been watching TV, reading the paper, listening to the radio or browsing the internet, you’ve no doubt seen and heard political messages from many candidates seeking local, state and national offices.

While President Donald Trump is all but assured a second run as the Republican candidate as he seeks re-election in November, the race to be his opponent on the Democratic ticket is heating up. While the field has narrowed considerably from the nearly two dozen hopefuls that launched campaigns last year and earlier this year, there are still several candidates making their cases to voters.

The Iowa Caucus and New Hampshire Primary are in the books, as the Democrats set their sights on Nevada and South Carolina later this month. Here in Arkansas, the date to remember is March 3, as the state joins with more than a dozen others as part of the critical “Super Tuesday” primaries.

One of the candidates who will be vying for votes in the Natural State is former New York Mayor Mike Bloomberg. The Bloomberg presidential campaign bus paid a visit to Crittenden County Wednesday morning, to not only get the Bloomberg 2020 campaign’s message to the area but to impress upon young voters the importance of exercising their right to vote.

During a whistle-stop at the Academies of West Memphis, the “Get It Done Express” greeted students and even Mayor Marco McClendon, who is a part of a coalition of mayors from across the U.S. who have publicly endorsed Bloomberg’s candidacy.

They say don’t talk about politics or religion in polite conversation, but followers who checked out photos of the tour stop on the Evening Times’ Facebook page apparently don’t ascribe to that policy. The post was viewed more than 7,000 times in less that 24 hours, and dozens of folks weighed in from all sides of the political spectrum.

Others took the opportunity to air their issues with the candidate.

“Bloomberg is in hot water over ‘stop-andfrisk,’” said Seth Greenway.

Doug Herren said, “Guy wants your guns and you to pay for everyone’s everything. No thanks!”

Harren was not the only second amendment advocate in the discussion.

Marshall Skinner added, “No thanks. Not voting for a gun-grabbing idiot that wants to raise taxes for the poor.”

Others were on the other side of the coin.

Bethany Darby didn’t directly support Bloomberg, but offered, “Anyone but Trump for President will do America great!”

Kimberly Evans agreed, saying “Anybody is better than Trump!”

Then there were some that simply had a problem with the idea of having a candidate’s campaign bus make a stop at the school.

“This was an all around bad idea,” said Tommy Allen. “It goes toward the narrative of training these kids to think a certain way instead of thinking for themselves. I’ll bet there are some parents none too happy about this.”

These kids can’t vote and a school parking lot is not the arena for politics. And you can’t have prayer in school.”

Sue Harris had the same argument, adding, “I don’t agree with a politician stopping at a public school to campaign. Those kids aren’t even old enough to vote.

While opinions vary, Meyers and Harris, as others pointed out, were quite mistaken about one point of their argument.

“Actually, my daughter is in that picture, and when it’s time, she will be able to vote!” said Samantha Dowden.

“Those are mostly seniors that are 18 or getting ready to turn 18!”

Besides, Lucia Johnson asked, “What’s wrong with involving them early?”

Harris opined, “If candidates from both parties were involved and it was during a civics class, then maybe. But not go out and basically have a pep rally for one candidate.”

That particular thread devolved into name calling and discord, with some like Desha Dixon calling them out. “Man…such hostility,” she said. “Just because someone expressed her opinion? What happened to freedom of speech? You don’t have to agree, but is it really necessary to be so rude?”

Zac Phillips said, “So much for keeping politics out of school! The district just gave an endorsement, intended or not.”

Lucia Johnson disagreed, saying, “The school did not give any endorsements.

Had that been Trump, would many have minded that stop? It’s a public school, which receives some funding by the government. I see nothing wrong with involving the future of America in politics.”

Erica Collins called the visit a “neat learning opportunity for our youth the see part of the political process in action.”

Susan Simpson argued that “politics and school should not be mixed,” adding, This should have been done at one of the city facilities not the school.”

To which Johnson replied, “All of our tax dollars fund those schools.”

Simpson retorted, “I understand that. The kids are not allowed to wear T-shirts with logos and they have strict guidelines for anything that displays political affiliation. I didn’t say it wasn’t a great opportunity to be a part of this event I stated my opinion that it should have been held at a city facility, like it has been done in the past. And I am certainly entitled to my opinion as are you.

This is not a debate.”

But as Jennifer Bell pointed out, “There was a political rally at the arena during the last election also.”

While the Bloomberg bus is already headed down the highway, one resident has another suggestion.

“We need a train station in West Memphis,” said Brandon Goodwin, “so the Trump Train can stop and say hello!”