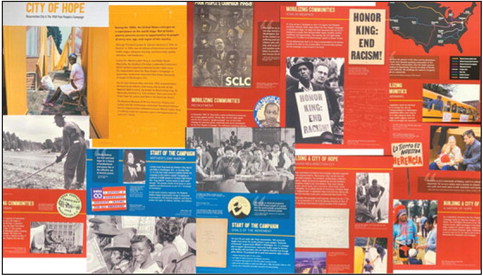 ASU Mid-South’s Sandra C. Goldsby Library highlights movement with Smithsonian Poster Exhibition From ASU Mid-South www.asumidsouth.edu This February, the Sandra C. Goldsby Library on the campus of Arkansas State University Mid-South presents “City of Hope: Resurrection City and the 1968 Poor People’s Campaign” poster exhibit. This exhibition kicks off a new regular series of posters from the Smithsonian that the college library will host throughout the year.

In conjunction with Black History month, the two-part exhibit from honors Dr. Martin Luther King Jr.’s final and most ambitious vision that each U.S.

citizen have equal access to economic opportunities and the American dream. Part one features the first eight posters in the exhibition and will be on display until February 18. Part two will be displayed beginning February 19 and continue through February 29.

It examines the Poor People’s Campaign — a grassroots, multiracial movement that drew thousands of people to Washington, D.C. For 43 days between May and June 1968, demonstrators demanded social reforms while living side-by-side on the National Mall in a tent city known as Resurrection City. Organized by the Smithsonian Institution Traveling Exhibition Service (SITES) in collaboration with the National Museum of African American History and Culture, “City of Hope” highlights a series of newly discovered photographs and an array of protest signs and political buttons collected during the campaign. Featuring 18 posters, the exhibition will help visitors engage and contextualize the Poor People’s Campaign’s historical significance and present- day relevance.

Although President Lyndon B. Johnson declared a “war on poverty” in 1964, tens of millions of Americans were denied livable wages, adequate housing, nutritious food, quality education, and healthcare. Led by Drs. Martin Luther King Jr. and Ralph David Abernathy, the Southern Christian Leadership Conference (SCLC) organized the Poor People’s Campaign in response to poverty as a national human rights issue. Stretching 16 acres along the National Mall between the Lincoln Memorial and the Washington Monument, Resurrection City housed 3,000 protesters with structures for essential services like sanitation, communications, medical care and childcare. It included a dining tent, cultural center and a city hall along the encampment’s bustling “Main Street.”

The Poor People’s Campaign marked an important moment in U.S. history and set the stage for future social justice movements.

Within months after Resurrection City’s evacuation, major strides were made toward economic equality influencing school lunch programs, rent subsidies and home ownership assistance for low-income families, education and welfare services through the Bureau of Indian Affairs, and more.

SITES has been sharing the wealth of Smithsonian collections and research programs with millions of people outside Washington, D.C., for more than 65 years. SITES connects Americans to their shared cultural heritage through a wide range of exhibitions about art, science, and history, which are shown wherever people live, work, and play. For more information, visit sites.si.edu.

The exhibit, which is also open to the public, can be viewed anytime during regular library hours, Monday-Thursday 7:30 a.m. to 7 p.m.

and on Friday 7:30 a.m. to 4:30 p.m. The community is welcome to use other the Sandra C. Goldsby Library resources for a small nominal annual fee. For more information call 870-733-6768 or email library@asumidsouth.