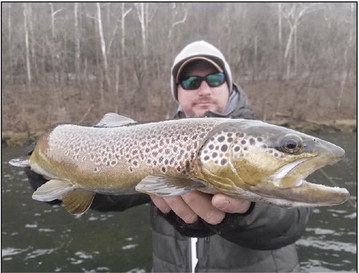 • White River — Cotter Trout Dock (870435-6525) said, “Welcome back and ‘Hello 2020!’ During the last two weeks of 2019, the Christmas break, the Army Corps of Engineers was able to attain normal power pool on Bull Shoals Lake, so we are now sitting at or very near the desired 659 feet elevation.

Water releases into the White River below the lake have decreased to an average of three generators with some additional lake releases in late afternoon as they lower the lake levels behind Bull Shoals. Very soon, we’ll see a more accommodating river level for easy access for our wade and bank anglers. Although we are still in the midst of the brown trout spawn, we’ve been able to bring several nice browns to the boat with sculpins drifting over areas that are often above water.

Rainbows are loving the flash of a copper-colored spinner or the orange belly of a Smithwick Rogue.

“We are being treated to a very mild winter so far; early mornings require layers of warm clothing, but the afternoons offer warmer temperatures that add to our enjoyment of the river, which is always more serene during cold months with fewer anglers. Make 2020 the year of introducing a young person to the great outdoors, including the joys of catching some spectacular trout.

See you on the river!”

John Berry of Berry Brothers Guide Service in Cotter (870-4352169) said that during the past week they had no rain, cool temperatures and moderate winds.

The catch-and-release section below Bull Shoals Dam is closed until Jan. 31 to accommodate the brown trout spawn. The state park will be seasonal catchand- release for the same period. All brown trout must be immediately released.

Double-fly nymph rigs have been very effective (John’s current favorite combination is a cerise high water San Juan worm with an egg pattern suspended below it). Use long leaders and plenty of lead to get your flies down.

Surface temperature is 50 degrees. Crappie are good. They’re best around brushpiles and are biting minnows and jigs. Bream are good, also targeting the brush, with worms and crickets. Black bass are excellent. Best catches are coming on Rock Crawler crankbait. Also use an A-rig. Catfish (big blue cats in particular) are good on jugs.

• Norfork Lake — John Berry of Berry Brothers Guide Service in Cotter (870-4352169) said Norfork Lake fell 0.4 foot to rest at seasonal power pool of 553.75 feet msl and 26.2 feet below the top of flood pool. The Norfork tailwater moderate flows and wadable water most days. Seasonal power pool has been reset for the lakes in the White River system. The lakes are now at or near power pool; expect wadable water in the very near future.

The Norfork is fishing much better on the low flows. Navigate this stream with caution as there has been major gravel recruitment at the bottom of Mill Pond and the dock hole over the past two years due to flooding. The most productive flies have been small midge patterns like ruby midges, root beer midges, zebra midges (black or red with silver wire and silver bead) and soft hackles like the Green Butt. The hot flies have been sowbugs, various colored San Juan worms and mop flies.

John also says, “As many of you know, one of my favorite things in the world is to wade fish on the Norfork tailwater. My last few excursions have been beset with complications. Due to an almost never ending level of heavy generation at Norfork Dam the opportunities have been few and far between.

“The first instance was a couple of months ago when I had a three-day opportunity to wade the Norfork. The day before the low water began I had worked very hard guiding two young men on Dry Run Creek. I passed on the first day to rest up despite gorgeous weather and a long period of low water. The next day the temperature dropped and it rained, then sleeted and finally snowed. I passed.

“My second opportunity came a few weeks ago. I had a Monday where the water was scheduled to be off for seven hours. I arrived at the Ackerman access at 8 a.m., which was a couple of hours after the water had been turned off. I quickly strung my rod, donned my waders and headed upstream to the catchand- release section.

“I went to my favorite spot and caught a nice trout on the third cast.

I caught my next one two casts later. I was into my fifth fish when I looked around and noted that the water was rising. It was 9 a.m. and they had turned the water on several hours before it was scheduled. I was disappointed, to say the least, because I had fished less than an hour.

“My most recent opportunity was last Monday. I had been out of town for four days to spend the holidays with my family. I had noticed a few days of low water while I was gone. I was anxious to get in a day of fishing. The prediction was for the water to be turned off from 9 a.m. until 5 p.m. It was to be cold and windy so I wore polypropylene long under wear, fleece pants, a fleece jacket, a down jacket, heavy wool socks, fingerless wool gloves and a fleece hat with a nylon shell.

“The plan was to leave the house about 10 a.m. That way the water would be dropped out by the time I drove to the access, strung my rod and put on my waders. Before I left the house, I checked my computer to ensure that the water had been turned off. It had not.

They were still running water.

“I felt like I had dressed up for the prom and had been stood up. I was a bit angry.

This time the Corps of Engineers had messed me up. I wonder if the employee in the control room at the dam owns a watch.

“I am not ready to give up. I will keep trying until I get to wade the Norfork again.”

There are no dams on these streams. They both have large drainages and are prone to flooding during and following any rain event.

The water can rise very quickly.